The Trojans at the San Francisco Opera

One of the largest, most magnificent pieces in the entire repertory, this rarely staged epic is presented here for the first time in 47 years, the way it was originally meant to be seen: two operas—The Fall of Troy and The Trojans at Carthage—in one spectacular evening! The tragic fall of Troy, the passionate love of two great leaders, the urgent pull of destiny: all unfold as part of Berlioz’s visionary masterpiece—French grand opera’s answer to Wagner’s Ring. Former Music Director Donald Runnicles, who masterfully conducted the Ring cycle in 2011, returns to lead this intensely lyrical, colorfully orchestrated, viscerally exciting score. David McVicar’s visually striking new production, “a major event” (The Guardian, London), moves the action to the mid-19th century. The world-class cast stars, as the ill-fated lovers Dido and Aeneas, the “vocally sumptuous and alluring” Susan Graham and Bryan Hymel, who gives “an impassioned and confident performance of a heroic role” (The New York Times). The “musically intelligent and vocally splendid” Anna Caterina Antonacci (The New York Times) and Daveda Karanas with her “large, golden voice” (San Francisco Classical Voice) share the dramatic role of the prophetess Cassandra.

Pre-Opera Talks are free to ticketholders and take place in the Opera House in the Orchestra section, 55 minutes prior to curtain.

*OperaVision, HD video projection screens featured in the Balcony level for this performance, is made possible by the Koret-Taube Media Suite. 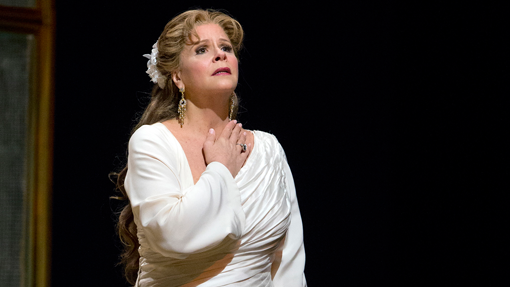 THE FALL OF TROY
Act I

After ten years of siege, the Greeks have departed from Troy, leaving behind a giant wooden horse as an offering to Pallas Athena. Only the prophetess Cassandra, daughter of the Trojan king Priam, wonders about the significance of their enemies’ disappearance. In a vision, she has seen her dead brother Hector’s ghost walking the ramparts. She has tried to warn her father of impending disaster and now urges her fiancé, Coroebus, to flee the city, but neither man will listen to her. When Coroebus begs her to join the peace celebrations, she tells him that she foresees death for both of them.

The Trojans offer thanks to the gods. Hector’s widow Andromache brings her young son, the heir to the throne, before King Priam and Queen Hecuba. The warrior Aeneas arrives and reports that the priest Laocoön is dead. Suspecting the wooden horse to be some kind of a trick, Laocoön had thrown his spear at it and urged the crowd to set fire to it, when two giant sea serpents appeared and devoured him and his two sons. Priam and Aeneas order the horse to be brought into the city to beg pardon of Athena. Cassandra realizes that this will be the end of Troy.

Aeneas is visited by the ghost of Hector, who tells him to escape the city. His destiny, he says, is to found a new empire that someday will rule the world. As the ghost disappears, Aeneas’s friend Panthus runs in with news that the Greek soldiers who emerged from the horse are destroying the city. Aeneas rushes off to lead the defense.
The Trojan women pray for deliverance from the invaders. Cassandra prophesizes that Aeneas and some of the Trojans will escape to Italy to build a city—a new Troy. Coroebus has fallen, and Cassandra prepares for her own death. She asks the women if they will submit to rape and enslavement. When Greek soldiers enter, the women collectively commit suicide. Aeneas and his men escape with the treasures of Troy.

THE TROJANS AT CARTHAGE
Act III

The people greet their queen, Dido. In the seven years since they fled their native Tyre following the murder of Dido’s husband, they have built a flourishing new kingdom. Dido’s sister Anna suggests that Carthage needs a king and assures her sister that she will love again. Visitors are announced who have narrowly escaped shipwreck in a recent storm—they are the remaining survivors of the Trojan army, with Aeneas among them. Dido welcomes them. When news arrives that the Numidian ruler, Iarbas, is about to attack Carthage, Aeneas identifies himself and offers to fight alongside the Carthaginians. Dido accepts, and Aeneas rallies the united forces of Carthage and Troy, entrusting his son, Ascanius, to the queen’s care.

Aeneas has returned victorious to Carthage. During a royal hunt, he and Dido seek shelter from a storm in a cave. They discover their love for each other.

It is several months later. Narbal, the queen’s adviser, is worried that since Dido fell in love with Aeneas, she has been neglecting her duties. He fears that in welcoming the Trojan strangers, Carthage has invited its own doom. Dido enters with Aeneas and her court to watch an entertainment of singing and dancing. She asks Aeneas to tell her more about Troy’s last days. When he talks about Andromache, Hector’s widow, who married Pyrrhus, one of the enemy, Dido sees a parallel to her own situation. Alone, she and Aeneas again proclaim their love, as the god Mercury reminds Aeneas of his duty and destination—Italy.

At night in the Trojan camp by the harbor, a young sailor sings a homesick ballad. Panthus and the Trojan captains are worried about omens and apparitions that remind them of their failure to move on. Aeneas enters, torn between his love for Dido and his duty to leave Carthage. He makes up his mind to see the queen one last time. But when the ghosts of Priam, Hector, Coroebus, and Cassandra appear, urging him to leave, he orders his men to set sail before sunrise. Dido appears. Aeneas swears that he loves her but must leave her. She curses him. As dawn breaks, the queen asks her sister to persuade Aeneas to stay, but the Trojan ships are already on their way out to sea. Furious, Dido orders a pyre built to burn his gifts and remembrances of their love. Now resolved to end her life, she bids farewell to Carthage and everything she held dear.

The pyre has been set up. Priests pray for Dido, who predicts that her fate will be remembered: a future Carthaginian general, Hannibal, will avenge her against Italy one day. Then she stabs herself with Aeneas’s sword. Dying, she has a vision of Carthage destroyed by eternal Rome. As the Roman Capitol is seen like a vision in the distance, the Carthaginians curse Aeneas and his descendants.