Libretto: Giacomo Rossi based on Aaron Hill and Torquato Tasso 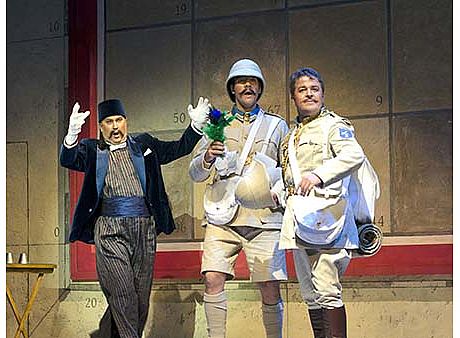 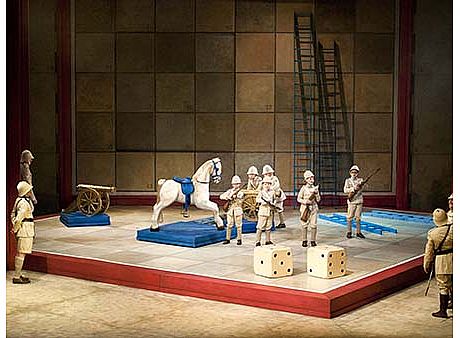 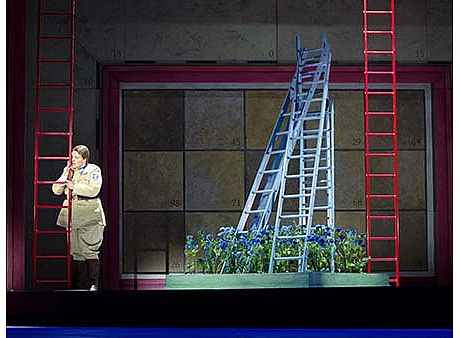 The Crusader army under Goffredo is laying siege to Jerusalem, where the Saracen king Argante is confined with his troops. With Goffredo are his brother Eustazio, his daughter Almirena, and the knight Rinaldo. As Goffredo sings of the coming victory, Rinaldo declares his love for Almirena, and Goffredo confirms that she will be Rinaldo’s bride when Jerusalem falls. Almirena urges Rinaldo to fight boldly and assure victory. As she departs, a herald announces the approach of Argante from the city. Eustazio surmises that the king fears defeat; this seems to be confirmed when Argante, after a grandiose entrance, requests a three-day truce to which Goffredo graciously assents. After Goffredo leaves, Argante ponders his love for Armida, the Queen of Damascus who is also a powerful sorceress, and considers the help her powers might bring him. As he muses, Armida arrives from the sky in a fiery chariot. She has divined that the Saracens’ only chance of victory lies in vanquishing Rinaldo, and has the power, she claims, to achieve this.

The scene changes to a garden, with fountains and birds, where Rinaldo and Almirena are celebrating their love. They are interrupted as Armida appears, and wrests Almirena from Rinaldo’s embrace. Rinaldo draws his sword to defend his lover, but a black cloud descends to envelop Armida and Almirena, and they are borne away. Rinaldo mourns the loss of his loved one. When Goffredo and Eustazio arrive they comfort Rinaldo, and propose they visit a Christian magician who may have the power to save Almirena. Rinaldo, left alone, prays for strength. 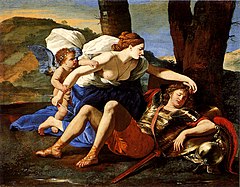 Armida falls in love with Rinaldo. 1616 painting by Nicolas Poussin

A sea shore. As Goffredo, Eustazio and Rinaldo near the magician’s lair, a beautiful woman calls from her boat, promising Rinaldo that she can take him to Almirena. Two mermaids sing of love’s delights, and urge Rinaldo to go in the boat. He hesitates, unsure what to do, and his companions attempt to restrain him. Angry at the abduction of his loved one, Rinaldo enters the boat, which immediately sails off. Goffredo and Eustazio are shocked at Rinaldo’s impulsiveness and believe that he has deserted their cause.

In Armida’s palace garden, Almirena mourns her captivity. Argante joins her and, overcome by her beauty, confesses that he now loves her. He promises that as proof of his feelings he will defy Armida’s wrath and secure Almirena’s freedom. Meanwhile, Rinaldo is brought before the triumphant Armida. As he demands that Almirena be set free, Armida finds herself drawn to his noble spirit, and declares her love. When he angrily rejects her she uses her powers to assume Almirena’s form, but Rinaldo suspects trickery, and departs. Armida, resuming her own appearance, is furious at her rejection yet retains feelings of tender love. She decides on another attempt to ensnare Rinaldo, and transforms herself back into Almirena’s shape, but then encounters Argante. Believing her to be Almirena, Argante repeats his earlier promises of love and freedom. Swiftly resuming her own form, Armida denounces his infidelity and vows vengeance. Argante defiantly confirms his love for Almirena and declares that he no longer needs Armida’s help. She departs in a fury.

A mountainside, at the magician’s cavern. Goffredo and Eustazio are told by the Magician that Almirena is being held captive in Armida’s palace at the mountain-top. Ignoring the magician’s warning that they will need special powers, the pair set off for the palace but are quickly driven back by Armida’s monsters. The magician then gives them magic wands that transcend Armida’s power, and they set off again. This time they overcome the monsters, but as they reach the gates of the palace it disappears, leaving them clinging to a rock in the midst of a stormy sea. They climb the rock and descend out of sight.

In the palace garden Armida prepares to kill Almirena. Rinaldo draws his sword, but Armida is protected from his wrath by spirits. Suddenly Goffredo and Eustazio arrive, but as they touch the garden with their wands it disappears, leaving them all on an empty plain with the city of Jerusalem visible in the distance. Armida, after a last attempt to kill Almirena, also disappears as Rinaldo strikes her with his sword. The remaining four celebrate their reunion, while Goffredo announces that the attack on Jerusalem will begin the next day.

In the city, Argante and Armida, in danger from a common enemy, become reconciled and prepare their troops for battle. Goffredo’s army advances, and battle finally commences. After a struggle for supremacy, Jerusalem falls to Goffredo; Argante is overcome and captured by Rinaldo, while Armida is taken by Eustazio. Rinaldo and Almirena celebrate their love and forthcoming marriage. Armida, accepting her defeat, breaks the wand which is the source of her evil power and together with Argante embraces Christianity. Goffredo expresses his forgiveness to his beaten foes and sets them free, before victors and vanquished join in a chorus of reconciliation.

The opera was frequently revised, most particularly in 1717 and in 1731; modern performances are usually a conflation of the versions available. Up to and including 1717, these changes had no significant effect on the plot. In the 1731 version, however, in Act 2 Armida imitates Almirena’s voice rather than assuming her appearance, and Argante declares his love to Almirena’s portrait rather than to her face. In Act 3 the marches and the battle scene are cut; Armida and Argante remain unrepentant and vanish in a chariot drawn by dragons before the conclusion.

This entry was posted in OPera and tagged George Frideric Handel, Rinaldo, The Israeli Opera. Bookmark the permalink.