“Rediscovered Operas Series” was created by Idea Press to propose the rediscovery of some operas of the eighteenth and nineteenth centuries. They were operas written and set to music that, for incomprehensible reasons, have not had the response they deserved in the musical and opera world or had success but have been forgotten through the years. The editors’ goal is to present the original librettos with the proper editing that does not change either the writing style or the language of the original text but corrects any typos and omissions caused by the damage that the original librettos may have undergone. To this they added a proper but brief biography of the lyricist and of the composer, a story of the theater in which the opera was first performed and, whenever available, prefaces, articles, and introductions of the times that offer a better understanding of the content of the librettos, both as poetic compositions and as tales. They hope that this undertaking will help a rekindling of the interest by musicologists and by the large public in these worthy and marvelous operas.

Here are the first four volumes, which will be available by June 2020:

Cimbelino was the first opera byNiccolò van Westerhout; indeed, to be precise it was the second he composed, but unfortunately his’ first ”TILDE “was never represented and in any case that composition was lost. Cimbelino, therefore, was his first opera performed in 1892 at the Argentina Theater in Rome. From the journalistic reports of the time we know that the opera was a great success, and the Maestro himself was called to the proscenium many times during the execution. The libretto, written by Enrico Golisciani is taken from a drama written by William Shakespeare and tells of a British king, Cimbelino (Cymbeline) precisely, at the time of the conquest by the Roman Empire. A compelling story accompanied by a highly valuable musical composition.

In this book you will find precisely the plot of the opera in its originality. As far as possible, the editors wanted to keep the literary expressions of the time (1800); today some words or phrases would have been written in a different way, but it was important for them to bring to the attention of the fans the originality of the prose writing with which the maestro van Westerhout had to compare himself for his composition.

Fortunio, the second opera by Niccolò van Westerhout wasrepresented at the Lirico theater in Milan in 1895. This opera was intended for the debut at the Teatro Alla Scala in Milan, but for various mishaps it was later moved to the Lirico. This opera, whose libretto was written by Giulio Scalinger, tells of a young woman, Musidora, who falls in love with a young man, Fortunio, who would be defined, nowadays, as a playboy or as womanizer. The woman, realizing the situation, commits suicide. An opera a little out of its time, but which begins to premise the changes and transformation of the melodrama of the late 1800s. Even in this transcription of the plot the originality of the booklet has been respected. The success achieved at his first performance in Milan was not like that of Cimbelino; in fact, the opera music was not easy to catch for the audience in general and it was necessary to be a little more refined to understand the various musical passages. Critics and opera enthusiasts, however, applauded the Maestro’s opera with intense favor. 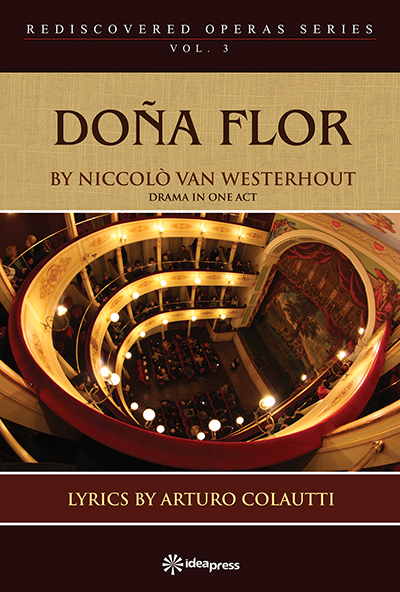 Doña Flor, the third opera by the Maestro, which was performed in the aptly named Niccolò van Westerhout theater in Mola di Bari in 1896, was conceived for a small stage, exactly as it was in that theater. Van Westerhout dedicated it to his hometown as a tribute. The story was written by Arturo Colautti and set in 17th century Venice. The truly exciting tale ends in a much more tragic way than the operas of the time; in fact, Doña Flor, convinced by her husband, kills her lover, Alvise Malipiero, who is  innocent of the accusations made against him. A triangle of love, jealousy and far-fetched revenge.

This is considered the masterpiece of Niccolò van Westerhout, but like all of the Maestro’s musical production it was abandoned, until it was rediscovered and then had a second, this time international, debut in New York in 2010.

Colomba, the fourth and final opera by Niccolò, debuted in 1923 at the San Carlo theater in Naples, many years after the Maestro’s death. This performance was tenaciously desired by the brother of the composer Vincenzo van Westerhout and by a group of friends of the late Niccolò, who unfortunately died in 1898 at the young age of 41.

This opera, also written by the poet Arturo Colautti, is set in the Napoleonic era, in the early 1800s, and tells of a young soldier returning to his Sardinia from the defeat that Napoleon Bonaparte suffered in Waterloo. There he meets and falls in love with a young woman, Graziosa, who, because of family intrigues, is not allowed to marry. The tragic end of Graziosa, caused by Colomba, the young man’s sister, ends the opera and Colomba’s repentance is of no use as Graziosa dies in the arms of her lover.