Posted on September 1, 2013 by editoreusa

The Semperopera is most important place in Dresden for Wagner’s works. Wagner himself called the orchestra, directed by him, the actual Staatskapelle as „Wonder Harpe“

The fact that Dresden is today famous for its music is in no small part thanks to Richard Wagner. Conversely, Dresden gave to Wagner the impulses and opportunities that enabled him to become the pioneer of modern music drama. Richard Wagner was born on 22nd May, 1813 in Leipzig. A year later he moved with his mother and stepfather, Ludwig Geyer, a friend of Carl Maria von Weber, to Dresden. When still very young, Richard was attracted to the stage. During a performance of Weber’s work “The Vineyard on the Elbe” on the occa-sion of a Royal wedding, he figured “as an angel, quite sown up in tricots, with wings on his back”. On 2nd December, 1822 Wagner was admitted to the Kreuzschule, the choir school attached to the Kreuzkirche (Church of the Cross). However, rather than singing in the Kreuzchor (the choir), the boy was drawn to the opera. He was very impressed by Weber. Nevertheless, during the services in the Kreuzkirche he got to know the “Dresdner Amen”, which he later made one of the musical leitmotifs in his last opera, “Parsifal”.

The Wagner-Geyer family moved frequently within Dresden. First, they lived at Moritzstr. 15, at about the spot where Wagner’s musical scores are now sold in the antiquarian bookshop in Wilsdruffer Strasse. Later the family moved to the square called Neumarkt, and finally to Waisenhausstrasse 24. On this site one can buy recordings of Wagner’s operas in the music section of the Centrum Galerie shopping mall.

Moving to Leipzig / Restless in the world / visits to Dresden

In 1828 Wagner moved with his family back to Leipzig. In June and July 1837 the young Wagner travelled to Dresden and stayed in what was then called “Gasthof Blasewitz”. There he read the novel “Rienzi” by Edward Bulwer Lytton, which inspired him to compose his great tragic opera. In 2007 a bronze plaque was put up on the building at Schillerplatz (now a retirement home called “Senioren-Zentrum ‘Am Blauen Wunder'”) in commemoration of Wagner’s stay there. After stays in various places, including Würzburg, Magdeburg, Königsberg, Riga and Paris, where Wagner tried in vain to start a career as musician, Wagner eventually returned to Dresden in 1842.

This return was occasioned by the performance of his opera “Rienzi”, which Weber’s widow, Caroline, had managed to arrange. In December 1841 he wrote to Robert Schumann from Paris: “I have chosen Dresden for the first performance – and not Berlin, where I had the same chance of acceptance, because in Dresden I can reckon with much greater success as regards the intensity of the performance than would be the case in Berlin”.

On 12th April, Wagner arrived with his first wife, Minna, at the Dresden hotel “Stadt Gotha”, in what is today Schloßstrasse 5. A few days later they moved into an apartment in Töpfergasse 7, diagonally opposite the Frauenkirche (Church of Our Lady). Today, the Hilton hotel stands on this site.

Life beyond his means

Shortly afterwards, in expectation of the success of “Rienzi”, Wagner rented a luxurious flat at Waisenhauss-traße 5 (today a Bank and office building from the end of 19th century). The premiere of “Rienzi” on 20th Oc-tober, 1842 was indeed a triumphal success, not least owing to the legendary singers Joseph Aloys Tichatschek and Wilhelmine Schröder-Devrient. However, the payment granted to Wagner of 300 Talers was insufficient for the lavish lifestyle he aspired to, and in November the Wagners had to move into more modest accommodation at Marienstrasse 9. Nevertheless, the times when Wagner had to struggle to make ends meet in Paris were now over. He now had patrons and friends. Madame Devrient gladly lent him 1000 Talers. The premiere of the opera “The Flying Dutchman” on 2nd January, 1843 brought Wagner less applause than expected and only 220 Talers in earnings. On 2nd February, 1843 Wagner was given the prestigious post of Hofkapellmeister (Director of the Court Orchestra) in Dresden, for an annual salary of 1500 Talers. Immediately, Wagner moved into a new home, this time at what was then Ostra-Allee 6, today – as no. 11 – an office building in front of Zwinger Palace and close to Semper Opera.

Music Feast in the Frauenkirche

As “Hofkapellmeister” Wagner especially cultivated German and French opera. He assisted Hector Berlioz, befriended the new musical director August Röckel and supported the music festival of the Saxon male voice choirs. The climax of the festival was a concert in the Frauenkirche in Dresden on 6th July, 1843. A hundred orchestral musicians played in the round nave of the church, 1200 singers standing in the galleries let “Das Liebesmahl der Apostel” (‘The Apostles’ Meal of Love’) ring out into the church’s huge dome. This work, regarded by musicologists as the forerunner of Wagner’s “Parsifal”, has been available for several years as a recording by the Dresden Philharmonic Orchestra.

In the same year, Wagner made the acquaintance of Gottfried Semper, who between 1838 and 1841 had built the opera house on Theaterplatz in which Wagner worked. They had long discussions about the ideal theatre architecture. The architect then made use of the ideas arising from these discussions in designing the Semper opera house as it exists today, and Wagner gained inspiration for his Festspielhaus in Bayreuth.

The year 1843 brought other events, too. As the newly elected Conductor of the Dresden Liedertafel (Table of Songs), he performed his “Festival Song” in the Zwinger for the unveiling of the monument to King Friedrich August I made by the sculptor, Ernst Rietschel. The monument is now located at Schlossplatz next to the Catholic Cathedral.

In 1844 Wagner initiated the transfer of the remains of Carl-Maria von Weber from London to the Old Catholic Cemetery in Dresden. The funeral ceremony featured the performance of Wagner’s Funeral Symphony for Brass and Muted Drums after motifs from Weber’s “Euryanthe”.

On 19th October, 1845 Wagner’s “Tannhäuser” was premiered in the opera house. Wagner received 300 Talers, whereas 8000 Talers were spent on the stage decoration. The next year, Wagner withdrew to an estate in Graupa during the summer. Here, he wrote the score for “Lohengrin”. Today the only WagnerMuseum at an authentic site in eastern Germany is located here. In preparation of Wagner’s 200th birthday, an exhibition about Wagner’s life with focus on his Dresden years will be shown from 2012 in the Graupa Manor, next to the “Lohengrinhaus”.

The sculptor Richard Guhr (1873-1956) created a monument, a large bronze sculpture of Wagner’s head, in the immediate vicinity of the museum. The Lochmühlenweg footpath leads from here to the lovely wooded gorge called Liebethaler Grund. In the middle of romantic wooded scenery is Saxony’s first Wagner monument – also made by Guhr – which was unveiled in 1933. It is also the largest monument to the composer and shows Wagner in a state of mystic transfiguration as the keeper of the Holy Grail. In Graupa, Wagner also got to know the Dresden-born conductor Hans von Bülow, whose wife Cosima Wagner ‘unhitched’ in 1863. Finding himself in constant financial difficulties, Wagner changed his place of residence once again. In 1847 he moved into the BaroqueMarcoliniPalace. A memorial plaque on what is today FriedrichstadtHospital commemorates this. 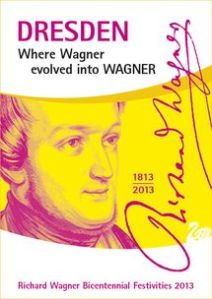 In 1848 Wagner became a revolutionary in Dresden. At first he tried to change the structure of music in the city. On 16th May he submitted to the Ministry his “Draft on the organisation of a German national theatre for the Kingdom of Saxony”. He also wished to develop a new form of opera, and so he began making sketches based on the Nibelungen epic. He congratulated the Dresden Court Orchestra (now the Sächsische Staat-skapelle [Saxon State Orchestra] Dresden) on the occasion of its 300th anniversary and called for the orchestra “as the most valuable and perfect of its kind in the Fatherland, to become as useful as it possibly can in the musical art of the Fatherland”.

Eventually, Wagner became actively involved in the political revolution. He published a number of articles in Dresden newspapers, calling for a political revolution. During street battles lasting from 6th to 8th May, the Baroque opera house next to the Zwinger went up in flames. Here, on the site where the Porcelain Collection is located today, Wagner had only recently (on 1st April) conducted the Palm Sunday Concert featuring Beethoven’s 9th Symphony – a tradition begun by Wagner that has continued to this day.

The uprising was put down. More than 200 people were killed and over 400 were taken to court. Wagner was on the ‘wanted’ list, and he and Semper fled to Switzerland.

For thirteen years, Wagner was unable to return to Saxony for fear of arrest. On 28th March, 1862 he was eventually amnestied and he returned for a visit on 3rd November. During this visit he finally separated from his first wife Minna (who is buried at Alter Annenfriedhof at Chemnitzer Straße), in order to be free for Cosima von Bülow, whom he later married. In April, 1871 he visited Bayreuth with her for the first time and immediately afterwards showed her his old homeland. During further visits to Dresden in 1873 and 1881 the Wagners stayed in the Hotel Bellevue, which was at that time directly adjacent to Semper’s opera house.

Wagner showed his wife Cosima all the places in Dresden that were associated with the development of his career as the most important musical dramatist of the 19th century. On 13th February, 1883 Wagner died in the Palazzo Vendramin in Venice – only a stone’s throw away from the Church of San Marcuola, in which the other great Dresden opera composer, Johann Adolf Hasse, is buried. Sixtytwo years to the day after Wagner’s death many of the original places in Dresden associated with Wagner were destroyed. Today, Dresden cultivates the works of Richard Wagner. “Tannhäuser” and “Lohen-grin” are part of the regular repertoire in Semper’s opera house. 2013 the Saxon State Opera and Orchestra will focus on Richard Wagner’s works from his Dresden times.