OTELLO saved by the performers at the MET

This ostensibly new production (it started in September of last year) of Verdi’s Otello at the Metropolitan Opera could have been the greatest pleasant surprise if only… Well, that is not how I would want to start my review, since the singers have all proved themselves to be professional in all senses, but truthfully there are some ifs, regardless of the famous critics’ pat in the back to the Met for an auspicious Met debut (the New York Times), and because of these ifs, the opera loses its great impact with the audience, especially for the neophytes who wanted to chew on a more ear-challenging Verdi, without the aria and recitative structure to which they may be used to, as in the classics Rigoletto or La Traviata. Otello has an audacious and complex orchestration and its characters are well developed, so having great singers and a great opera, what could go wrong? The comments of the audience on the way out of the theater (yes, it’s true, I did not take a poll, all I did was eavesdrop, but even that can give you an idea of at least how the audience reacted)  were mostly  matching my impressions, so I could not have been wrong in feeling that something had gone amiss.

What was it? I am already not a promoter of updating or modernizing the story, but there are times when it works; most of the times it does not, sadly. The efforts of the scenic designer (Es Devlin), a respected professional who created a marvelous series of sliding and rotating transparent arches, illuminated in a way to give a feeling of fable, could have worked for another type of show, maybe some fantasy similar to Alice in Wonderland, but it had no pertinence to this story. I cannot blame Mr. Devlin or Donald Holder (the lighting designer) for the failure to deliver, though. Mr. Bartlett Sher, who produced this opera version, is fully responsible for the choices taken and for their effect on the story development. The amazing projected images by Luke Halls did bring some sanity at times, but their use got old fast enough, having to deal with those inadequate structures that someone wrongly imagined to create a proper environment for an Otello. And what is with the choir always dressed in black, with reminiscence to a witch tribunal among the Puritans? This opera already has enough drama within itself without attempting to create an unrelated atmosphere of doom. The fact that the choir stands on stage dressed as for a funeral, singing about the possibility of a shipwreck could be acceptable, maybe even building on the roots of the tragedy that will soon loom behind the scenes, and that the same choir (in black) just goes on a happy frenzy as soon as Otello’s ship comes to port is annoying to people of good taste and clashing with the expectations of an opera lover. How believable is seeing Venetians in Crete dressed as English Puritans (or whatever those outfits were meant to represent)? And choosing those garments to create an even deeper sense of doom does not feel incorrect to the director, when the celebration occurs? Just an opinion….

The sliding arches, with their majestic beauty and there lack of usefulness to the story and its setting, have another characteristics that attempted even more to destroy the proper flow of the drama: their inadequacy for the movements of the actors. To see the poor Otello (an otherwise flawless and magnificent Aleksandrs Antonenko, who proved his voice skills and his power over and over throughout the performance) attempting to go around the arches, passing through them clumsily as if that would have been a naturally expected action was disheartening to say the least. Didn’t the director notice the lack of flow in the actions? Did the glitter and special effects convince him that it was an ideal choice? It would have been nice to hear an explanation by Mr. Sher regarding the meaning of these flowing arches (Symbolism? Cubism? Belated expressionism? Minimalism?).

Thankfully, besides the magnificent voice of Mr. Antonenko, a marvelous, silky-textured voiced commanding soprano (Hibla Gerzmava) performed in an impeccable manner, although there were two instances when I could not hear her, and I am not certain whether it was the volume of the orchestra, which otherwise seemed to have a clear grasp of the music interpretation and played in a remarkable fashion (also thanks to the excellent conduction by Adam Fischer) or a slight loss of volume by the soprano. Nevertheless, it was forgivable, especially keeping mind of the difficulty of the part and the strange selections of movements across the stage set by Mr. Sher, which would have confounded and stressed out any normal performer ( maybe not a rocker on acid, but I am not sure about that). 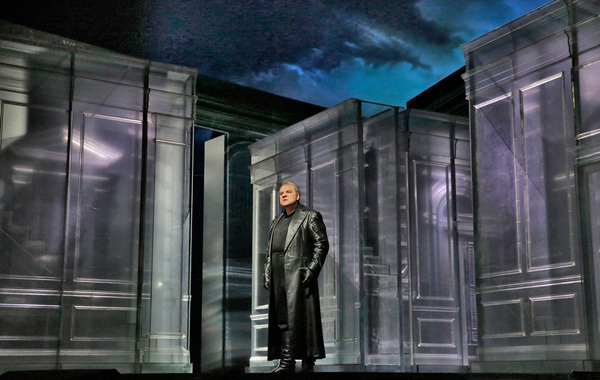 A ‘bravo’ also to Alexey Dolgov, an effective and substantial Cassio., and  to Iago (Željco Lučić, a baritone with a luxurious voice and a great stage presence,) who proved to be a prodigious ‘evil character’ and at times he made me forget the inadequacy of the staging. Actually, there was a time in this magnificently sung Otello when I did forget that there were no sliding psychedelic arches in Cyprus, also because they finally were in the background and the main part of the stage was occupied by a real bed (a touch of sanity that surprised me; I expected a sleeping bag or maybe a transparent platform that would have stood in for the bed). The brilliance of the late Verdi’s musical choices was here in primo piano, and proved their validity in bringing the depth of the tragedy and the real essence of the drama to the audience. You could feel the drama in your chest; people’s eyes were moist and their necks were tense. Yes, it was a tragedy and the marvelous work by the composer was grabbed successfully by the singers as well by the orchestra, bringing a divine product on stage. One has to recognize that the singers were all so convincing and skilled that they were able to annihilate the negative effects of the stage production, or at least most of the time.