Hugely popular ever since its Venice premiere, Verdi’s tense and brutal tale of a deformed court jester caught in a web of corruption, lechery, and revenge runs the full emotional gamut in true operatic fashion. The iconic melodrama boasts an action-packed plot, memorably complex characters, and a hit parade of brilliant music.

Audio described performance for visually impaired patrons available on Sunday, January 12. Description begins 10 minutes prior to the beginning of the matinee.

Who’s Who?
The Duke of Mantua is an attractive young nobleman who spends his leisure time seducing every woman he sees.
Rigoletto, the Duke’s court jester, is a nasty, miserable old hunchback.
Gilda, Rigoletto’s daughter, is innocent, virginal, and far too good for this wicked world.
Giovanna is the unreliable duenna Rigoletto has hired to keep an eye on Gilda.
Count Ceprano is one of the Duke’s courtiers. All the courtiers loathe Rigoletto, but Ceprano more so than most.
Countess Ceprano, his wife, is quite the beauty.
Count Monterone is an old nobleman whose daughter has been ruined by the Duke.
Sparafucile is a hired assassin who runs a seedy inn on the outskirts of town.
Maddalena is Sparafucile’s attractive sister. She dances in the streets in order to lure men to Sparafucile’s tavern, where he kills them and dumps their bodies in the river.

Where and When?
In Mantua, a city in northern Italy. Seattle Opera’s 2014 production is set in the 1930s.

What’s Going On?
That irrepressible bad boy, the Duke of Mantua, is at it again. He’s just had his way with the beautiful daughter of Count Monterone, and next on his list is a pretty girl he’s seen in church. But at one of his many parties, his eye is caught by the lovely Countess Ceprano, wife of another courtier. Rigoletto, the wicked jester who encourages the Duke’s licentious ways, suggests the Duke kidnap Ceprano’s lovely wife and throw the husband in prison, banish him, or behead him. Ceprano and the other courtiers vow revenge on Rigoletto, who, they learn, keeps a mistress himself: a beauty hidden away in a remote house. But Rigoletto laughs them off: as the Duke’s favorite, he is untouchable.

Into the middle of their bacchanal bursts Count Monterone, who tells the Duke he will be avenged for his daughter’s honor. When Rigoletto ridicules him, the old man curses both the Duke and his vicious jester. The Duke’s bodyguards drag Monterone off to prison while Rigoletto cringes in terror of the curse.

Rigoletto’s career (if you can call it that) is all about inciting the Duke to sleep with every woman he sees. His home life, on the other hand, is all about preventing his beloved daughter, Gilda, from sleeping with anyone. Gilda is the one ray of light in Rigoletto’s terrible life, and he keeps her a virtual prisoner in the house. She is only allowed outside to go to church, and doesn’t even know her father’s name or what he does.

Her naiveté makes her easy prey for the Duke, who comes calling one night while Rigoletto is away. Gilda recognizes the handsome young man who goes to her church; he tells her he is a poor student named Gualtier Maldé and wins a declaration of love from her lips. Later that night, she is musing over his name when the courtiers appear on the street below her balcony, wearing masks. They have come to abduct Rigoletto’s “mistress.” Rigoletto shows up, and they tell him they are planning to abduct Countess Ceprano as a surprise for the Duke. Rigoletto wants to help, so they give him a mask; but it’s really a blindfold, and Rigoletto doesn’t see that he is in fact helping them abduct his own daughter until it’s too late.

The next day, the Duke is lamenting Gilda’s sudden disappearance when his courtiers tell him, “We’ve got her downstairs.” He immediately dashes off to have his way with her. It doesn’t take Rigoletto long to figure out what is going on: but the courtiers, astonished (and pleased) to find out that she is really the jester’s daughter, gang up and prevent him from helping her. Soon enough she emerges from the Duke’s room, a virgin no longer.

Rigoletto vows he himself will bring about Monterone’s vengeful curse on the Duke. He hires Sparafucile to kill him, and before long the Duke (this time disguised as a soldier) is wooing Sparafucile’s sister Maddalena with great success. Rigoletto takes Gilda, who still loves the Duke, to Sparafucile’s inn so she can see him seducing another woman. It breaks her heart, but still she loves him. Gilda cannot stay away, and when she figures out what Sparafucile means to do, she finds a terrible way to defy her father and rescue her beloved—and fulfills old Monterone’s curse. 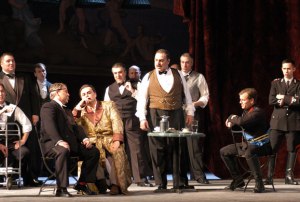 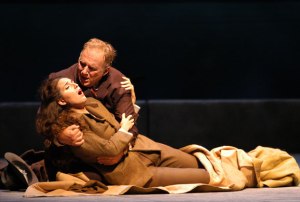