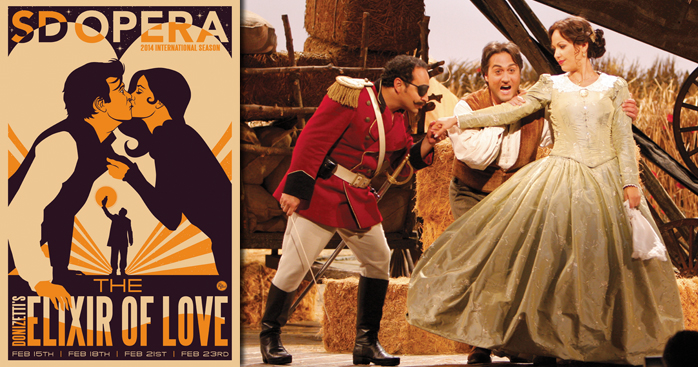 THE ELIXIR OF LOVE

Is it truly a magic elixir or just a bottle of cheap Bordeaux? Perhaps it doesn’t matter if it works. Nemorino desperately wants to marry the wealthy Adina, who seems out of his league. When she attracts a handsome Sergeant as her suitor, he turns in desperation to Dr. Dulcamara’s “elixir of love” in hope of winning her, spends all his money, and has to enlist to get cash for more. When the quack Doctor Dulcamara tells the village girls that Nemorino is suddenly rich they all chase after him, so Nemorino knows the potion works! But it takes more than an elixir to win Adina.

This delightful comedy, from the composer of last season’s The Daughter of the Regiment, overflows with melody and famous arias including the heartbreaking “Una furtiva lagrima”, a favorite of tenors and audiences. With a lovesick peasant, a beautiful rich woman, a handsome Sergeant, and a quack Doctor you have the very definition of a romantic comedy, one that Hollywood could never rival and with far more satisfactory results!

The running time is approximately 2 hours and 20 minutes including one intermission.
Sung in Italian with English translations displayed above the stage.

SYNOPSIS OF THE ELIXIR OF LOVE

Adina, a wealthy beauty, her friend Gianetta, and a group of peasants are resting beneath a shade tree on her estate. From a distance, Nemorino, a young villager, watches the bucolic scene, lamenting that he has nothing to offer Adina but love. The peasants urge their mistress to read them a story of how Tristan won the heart of Isolde by drinking a magic love potion. No sooner has she done so than Sergeant Belcore swaggers in with his troop. The soldier’s conceit amuses Adina, but he is not dissuaded from asking her for her hand in marriage. Promising to think the offer over, she orders refreshments for his comrades. When Adina and Nemorino are left alone, she tells him that his time would be better spent looking after his ailing uncle than mooning over her, for she is as fickle as a breeze.

In the town square, villagers hail the arrival of Dr. Dulcamara. The foppish quack declares the potion he is selling capable of curing anything and, since it is expensive, the villagers buy eagerly. When they have gone, Nemorino asks Dulcamara if he sells the elixir of love described in Adina’s book. Showing the youth a bottle of Bordeaux, the charlatan convinces him this is the very draught. Though it costs him his last gold piece, Nemorino buys the wine and hastily drinks it. Adina enters to find him quite tipsy. Certain that he will win her love as did Tristan of Isolde in the storybook, he pretends indifference to her. To punish him, Adina flirts with Belcore who, informed that he must return to his garrison, persuades her to marry him at once. Horrified, Nemorino begs Adina to wait one more day, but she ignores him and invites the entire village to her wedding feast. As the peasants shout taunts, Nemorino rushes away, moaning that he has been ruined.

At a local tavern, the pre-wedding supper is in progress. Dr. Dulcamara, self-appointed master of ceremonies, sits with the bridal couple. “What a pity Nemorino cannot see how happy we are,” thinks Adina. Her mind is distracted by the doctor, who suggests they blend their voices in a barcarole about a lady gondolier and her wealthy suitor. When the duet ends, the girl goes with Belcore to another room to sign the marriage contracts and the guests disperse. Remaining behind, Dulcamara is joined by Nemorino, who begs for another bottle of the elixir – his pleas are rejected because of his lack of funds. Belcore returns annoyed because Adina has postponed the wedding until nightfall and when he spies Nemorino, he asks why he is so sad. The youth explains his financial plight, whereupon the sergeant persuades him to join the army to receive a bonus awaiting all volunteers. Belcore leads the perplexed Nemorino off to sign the necessary documents.

Peasant girls gathered in the square learn from Gianetta that Nemorino’s uncle has died and willed him a fortune. When he reels in, still giddy from the wine, they besiege him with attention. Unaware of his new wealth, he believes the elixir has finally begun to take effect.

Adina and Dr. Dulcamara arrive in time to see him leave with a bevy of beauties and she, angry that he has sold his freedom to Belcore, grows doubly furious. Scenting a new sale, Duclamara explains that Nemorino’s popularity is due to the magic elixir. Adina replies that she will win him back and she leaves, followed by the doctor. Nemorino enters in a pensive mood. He takes heart because of a tear he has seen on Adina’s cheek but, when she returns, he feigns indifference. Undone, she confesses she has purchased his enlistment papers because she loves him. Back in the square, Belcore marches in to find Adina affianced to Nemorino and declaring that thousands of women await him, he accepts the situation. Attributing Nemorino’s happiness and inheritance to the elixir, Dulcamara quickly sells more bottles of the wine before making his escape to another town.