“A MASKED BALL” in San Diego

Posted on February 8, 2014 by editoreusa

Although the close relationship between Sweden’s King Gustav III and Amelia, wife of his best friend, Count Anckarström, has never crossed the line, jealousy and politics cause Anckarström to join a band of conspirators and ultimately to murder the King in front of his wife at a masked ball. As he dies, Gustav reveals the truth, and in operatic tradition, pardons Anckarström.

Inspired by the real-life assassination of King Gustav III after which Anckarström was actually beheaded, A Masked Ball is powerful, threatening, dangerous and romantic. The music is some of Verdi’s best and with artists of the caliber we have assembled, this production promises to be one of the most powerful, musical and dramatic ever seen on our stage. Italian conductor, Massimo Zanetti, in demand at the Deutsche Oper Berlin, Dresden and Munich makes his debut, joined by Lesley Koenig, director of last season’s hugely successful Samson and Delilah.

The running time is approximately 3 hours including two intermissions.
Sung in Italian with English translations displayed above the stage. 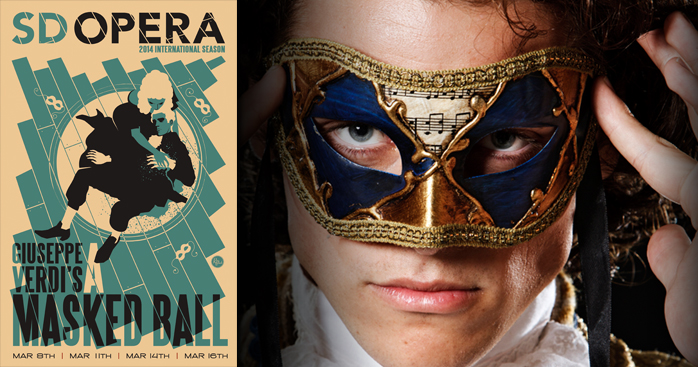 SYNOPSIS OF A MASKED BALL

The King of Sweden, Gustav III, scoffs at news from Count Anckarström, his friend and secretary, that conspirators are plotting against him. A judge demands that a woman be accused of witchcraft be banned from the city, but the page Oscar jumps to her defense. The king decides it might be amusing to disguise himself and visit the woman to see if she is indeed in league with the devil, and invites his court and staff to join him.

Gustav is the first to arrive at the home of Madame Arvidson, the suspected witch, and notices a servant of Amelia – Anckerström’s wife, whom Gustav secretly loves. The servant asks Madame Arvidson for a private visitation by his mistress, and Gustav hides himself in order to observe Amelia. Amelia admits to Madame Arvidson that she loves a man who is not her husband, and that man is Gustav. She seeks peace from this love for her husband’s best friend, and Madame Arvidson advises her to go to the gallows at midnight and pick an herb that will stop her from loving Gustav.

When Amelia leaves, the crowd returns and Gustav comes out from his hiding place. He asks Madame Arvidson to read his palm. To the crowd’s horror, she pronounces that Gustav will soon die by the hand of a friend. He laughs at the gullibility of the crowd, which is shocked at the prediction.

Just prior to midnight, Amelia finds her way to the gallows. Gustav’s arrival surprises her and she begs him to leave, but eventually admits her love for him. Anckerström soon arrives and Amelia immediately covers her face with a veil. Anckerström has followed Gustav to protect him from conspirators who are, at the moment, surrounding them with plans to kill Gustav. Amelia and Anckerström convince Gustav to flee. The conspirators arrive and, realizing they’ve caught the wrong man, ask the woman to remove her veil. Anckerström steps forward, willing to fight to protect the veiled woman’s identity. When a duel seems imminent, Amelia steps forward, removing her veil. Furious that his wife was meeting with his friend in the night, Anckerström asks the conspirators to visit him at his home the next day.

When the conspirators arrive, Anckerström tells them he plans to join their plot against the king. They draw lots to see who will kill Gustav, and Anckerström wins. Oscar arrives with an invitation for them all to attend a masked ball and Anckerström vows to kill Gustav at the party.

The king arrives at the party in costume. A woman in disguise advises him to leave at once – his life is in danger. Gustav recognizes her as Amelia and he tells her he is sorry for betraying his friend and plans to send her and her husband back to their homeland. Anckerström now recognizes Gustav with Amelia and rushes forward to mortally wound him. The guests are outraged as Anckerström is revealed as the killer, but Gustav insists that he is still soverign over them. He grants Anckerström a reprieve and admits that he loves Amelia, but that she is innocent. He gives Anckerström a sealed commission for his safe departure.