In the magical world of Don Quixote’s Spain, the eccentric knight pursues his impossible dream of capturing the heart of Dulcinea, his idealized woman, who sends him on a quest to recover her stolen necklace. With his loyal sidekick Sancho, he tilts at giant windmills, confronts bandits, and is nearly killed, but achieves his goal. However, when he returns with the prize, he is mocked, scorned and rejected. In one of the most emotional scenes in opera, the delirious Quixote dies believing he hears Dulcinea’s voice calling to him from a distant star.

Pulsating with Spanish rhythms, dances and color, Don Quixote welcomes the return of the brilliant Ferruccio Furlanetto, who has conquered opera houses from New York to Moscow, Vienna to Paris and Madrid to Budapest. The great Italian bass is reunited with Eduardo Chama as Sancho Panza, a role he has sung to acclaim in Madrid, Palermo and Buenos Aires. Singing the seductive Dulcinea for the first time is the beautiful Anke Vondung, praised here as Octavian in Der Rosenkavalier, coming fresh from performances at Dresden Opera, Palermo, Munich and Hamburg. Karen Keltner, a specialist in French repertoire, conducts the opera once more and Keturah Stickann directs this emotional and moving production.

The running time is approximately 2 hours and 16 minutes including one intermission.
Sung in French with English translations displayed above the stage. 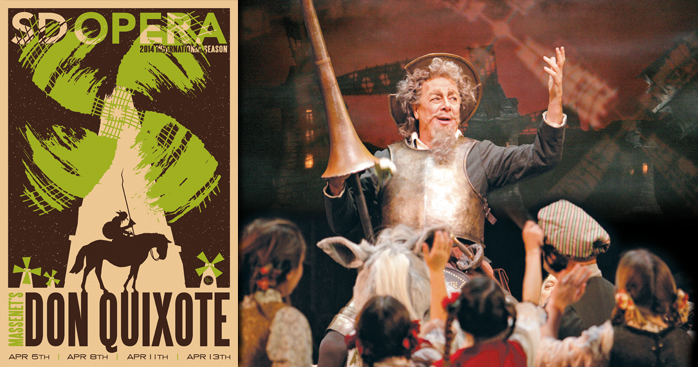 ACT I – A square in front of Dulcinea’s house

A festival is being celebrated, as four hopeful admirers of Dulcinea serenade her. She explains philosophically that being adored is not enough. She withdraws as the crowd acclaims the arrival of the eccentric Knight and his squire, Sancho. Don Quixote is riding on his horse Rosinante, and Sancho is on a donkey. Delighted by the attention of the crowd, Quixote tells a reluctant Sancho to throw them money. After the crowd disperses, Quixote himself serenades Dulcinea, but is interrupted by Juan, a jealous admirer of Dulcinea. A sword fight follows, interrupted by Dulcinea herself. She is charmed by Quixote’s antique attentions. The old man offers her his devotion and a castle. She suggests instead that he might retrieve a pearl necklace of hers stolen by Ténébrun, a bandit chief. He undertakes to do so as, to his surprise, Dulcinea rejoins her men friends. Recovering his composure, and convinced she loves him, Quixote stands guard outside her window.

ACT II – In the countryside

On a misty morning, Don Quixote and Sancho enter, the Knight composing a love poem. Sancho delivers a grand tirade against their expedition, against Dulcinea and against women in general. As the mists disperse, Quixote sees windmills which he mistakes for giants. To Sancho’s horror, Quixote attacks them, crying out the name of Dulcinea.

ACT III – In the mountains

Don Quixote and Sancho are searching for the bandits, who, Quixote is convinced, are nearby. Sancho goes to sleep while Quixote stands guard. The bandits suddenly appear and after a brief fight take the knight prisoner. Sancho escapes. Surprised by the defiance of the old man, the bandits give him a beating and intend to kill him, however Quixote’s reply moves Ténébrun, the bandit chief, to mercy. Quixote explains his mission and the necklace is returned to him. The bandits ask for the blessing of the noble knight before he leaves.

A party is in progress, but Dulcinea is melancholy. Rousing herself, she snatches a guitar and sings and leaves. Sancho and Don Quixote arrive. While waiting for Dulcinea, Sancho asks for his reward to which Quixote responds with vague promises of an island, a castle and riches. Dulcinea and her party greet the Knight who returns the necklace to universal acclaim. However when he asks Dulcinea to marry him, Quixote is greeted with laughter. Taking pity, Dulcinea tells the others to leave, apologizes and explains that her destiny and her way of life are different from his. She kisses him on the forehead and leaves. When partygoers make fun of the old man, Sancho vigorously reproaches them, and takes his master away.

On a clear starry night, Don Quixote is dying. He remembers having promised Sancho an island as his reward, and offers him an isle of dreams. As he dies, Quixote sees a star shining brightly above, and believes he hears the voice of Dulcinea beckoning to him.