Der fliegende Holländer at the Royal Opera House in London

The Flying Dutchman has been cursed for eternity. Once every seven years he is allowed to come ashore to seek redemption. He may have found it in Senta, a woman who longs for escape from her dreary life.

Senta accepts the Dutchman’s offer of marriage. But the Dutchman wrongly suspects her of unfaithfulness. Thinking he’s protecting her, he leaves to resume his endless voyaging. Senta is left alone.

Shortly before the premiere of Der fliegende Holländer in Dresden, Wagner had returned from a deeply unsuccessful two-year stint in Paris. He had gone there to make his fortune, but found his way barred by a strict class-based system. One of the bitterest blows came when Léon Pillet, director of the Paris Opéra, accepted his libretto for Der fliegende Holländer – but then commissioned a score not from Wagner but from French composer Pierre-Louis Dietsch. But the Dresden premieres of first Rienzi in October 1842 and Der fliegende Holländer in January 1843 were immense successes, and marked the beginning of Wagner’s career as one of the greatest operatic composers. 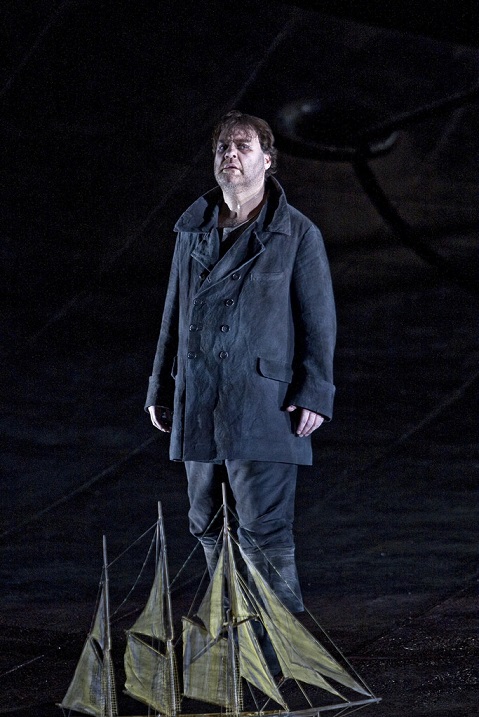 Tim Albery’s Olivier-nominated production for The Royal Opera delves deep into the psychology of Wagner’s cursed wanderer and his beloved Senta, detailing the monomania and uncompromising idealism that finally drives them apart. Michael Levine’s elemental single set is dominated by a rolling metal hull that represents the Dutchman’s phantom ship, the poverty of Senta’s home and the treacherous sea.

The performance lasts about 2 hours 20 minutes; there is no interval

Sung in German with English surtitles

Latvian conductor Andris Nelsons made his Royal Opera debut in December 2009 with La bohème, and has since returned to The Royal Opera to conduct Madama Butterfly, Salome and Elektra. In the 2014/15 Season he returns to conduct Der fliegende Holländer for the Company.

Born into a family of musicians, Nelsons first became interested in opera aged five after seeing Tannhäuser. He learnt piano, trumpet and singing, and began his career as a trumpeter with Latvian National Opera. He studied conducting in St Petersburg and with Mariss Jansons, who remains his mentor. Nelsons was Principal Conductor of Latvian National Opera 2003–7, at the start of the 2008/9 season became Principal Conductor with the City of Birmingham Symphony Orchestra and in March 2013 was appointed Music Director of Boston Symphony Orchestra.

As well as his busy schedule with the CBSO, Nelsons works with many international orchestras including the Royal Concertgebouw, Vienna Philharmonic and the Philharmonia Orchestra. Opera engagements include Lohengrin (Bayreuth Festival), Eugene Onegin, Carmen and Tosca (Vienna State Opera), La bohème (Berlin State Opera) and Queen of Spades (Metropolitan Opera, New York). Nelsons’s recordings include works by Tchaikovsky, Richard Strauss and Stravinsky with the CBSO on Orfeo and Opus Arte DVDs of La bohème and Lohengrin.

Terfel was born in North Wales into a music-loving family and studied at the Guildhall School of Music and Drama with Rudolf Piernay. In 1989 he won the Lieder Prize in the BBC Cardiff Singer of the World Competition. He made his professional debut in 1990 as Guglielmo (Così fan tutte) with Welsh National Opera. He now sings at the world’s leading opera houses, including the Metropolitan Opera, New York, La Scala, Milan, and Vienna State Opera. Along with major roles in operas by Mozart, Verdi, Wagner and Puccini, his repertory includes Nick Shadow (The Rake’s Progress), the four villains (Les Contes d’Hoffmann) and Sweeney Todd. In 2010 he sang Hans Sachs (Die Meistersinger von Nürnberg) to great acclaim with WNO.

Terfel appears regularly at the BBC Proms, including at the Last Night of the Proms in 2008 and in 2013. He is a recording artist with Deutsche Grammophon and also appears on many opera DVDs. Terfel was made a CBE in 2003 and was awarded The Queen’s Medal for Music in 2006. His interests away from singing include vintage wines, golf and art.

Canadian soprano Adrianne Pieczonka made her Royal Opera debut as Donna Anna (Don Giovanni) and has since sung Chrysothemis (Elektra) for the Company. In the 2014/15 Season she returns to sing Senta (Der fliegende Holländer).

Pieczonka grew up in Burlington and studied at the University of Western Ontario and at the Opera School of the University of Toronto. She moved joined the Vienna Volksoper in 1989 and in 1991 became a member of the Vienna State Opera. Concurrent engagements included her debuts at Glyndebourne Festival, as Donna Elvira (Don Giovanni), and at the Metropolitan Opera, New York, as Liza (Queen of Spades).

Pieczonka’s repertory ranges from Mozart to Britten. She is particularly well known for her interpretations of Wagner and Strauss heroines, with engagements including Sieglinde (Die Walküre) for Bayreuth Festival, Canadian Opera Company and Metropolitan Opera, New York, Senta for Bayreuth Festival and Paris Opéra and the Marschallin (Der Rosenkavalier), Ariadne and Arabella for major European companies including Vienna State Opera. Her other repertory includes Leonore (Fidelio), the Empress (Die Frau ohne Schatten), Amelia Grimaldi (Simon Boccanegra) and Tosca. Her recordings include Lohengrin under Bychkov and discs of Puccini arias and music by Wagner and Strauss. Pieczonka was made a Kammersängerin of Vienna State Opera in 2007.

König was born in Mutlangen and began his singing career as a member of the Schwäbisch Gmünd St Michael’s boys’ choir. He went on to study in Karlsruhe and at the Mannheim Conservatory with Rudolf Piernay. His early engagements included Jeník (The Bartered Bride) for Glyndebourne Festival, Narraboth (Salome) and Tamino (Die Zauberflöte) in Frankfurt and Lensky (Eugene Onegin) for Basle Opera. He currently sings for Europe’s major opera companies, including Hamburg State Opera, Frankfurt Opera, Berlin State Opera, Bavarian State Opera, Liceu, Barcelona, Teatro Real, Madrid, and La Scala, Milan, and has also appeared with the Canadian Opera Company. He made his Bayreuth Festival in 2012 as Erik and appeared as Max in Jens Neubert’s film Hunter’s Bride, adapted from Der Freischütz.

Rose studied music at the University of East Anglia and singing at the Guildhall School of Music and Drama and the National Opera Studio. He was a member of the Glyndebourne Chorus in 1986 and that year went on to make his professional debut as the Commendatore for Glyndebourne on Tour. He performs regularly for leading opera companies, including La Scala, Milan, Bavarian State Opera, Hamburg State Opera, Deutsche Oper Berlin, Berlin State Opera, Semperoper Dresden, Paris Opéra, Vienna State Opera, Liceu, Barcelona, and Rome Opera. His roles for English National Opera include Boris Godunov, and for the Metropolitan Opera, New York, Bottom (A Midsummer Night’s Dream), La Roche (Capriccio) and Baron Ochs.

British tenor Ed Lyon made his Royal Opera debut in 2008 as Lysander (A Midsummer Night’s Dream) and has since sung Pane (La Calisto), Hylas (Les Troyens), Dancing Master (Ariadne auf Naxos) and Amidas/Wind (L’Ormindo at the Sam Wanamaker Playhouse, Shakespeare’s Globe) for the Company, and Gernando (Haydn’s L’isola disabitata) with members of The Royal Opera at the Hobart Baroque Festival. In the 2014/15 Season he returns to sing Sailor Tristan und Isolde and Steersman (Der fliegende Holländer for The Royal Opera.

Lyon studied history of art at St John’s College, Cambridge, where he was a choral scholar, and went on to train at the Royal Academy of Music and the National Opera Studio. He has appeared for all the major British companies, and for such international companies as the Opéra-Comique, Teatro Real, Madrid, Theater an der Wien and Netherlands Opera. His wide repertory includes such roles as Hippolyte (Hippolyte et Aricie), Don Ottavio (Don Giovanni), Tamino (Die Zauberflöte) and Freddy Eynsford-Hill (My Fair Lady).

Lyon has sung at in concert major venues worldwide, including the Royal Festival Hall and Royal Albert Hall in London, the Salle Pleyel in Paris, the Berlin Philharmonie and the Alice Tully Hall, New York, in repertory ranging from Bach’s B Minor Mass to Maxwell Davies’s Solstice of Light. His recordings include a CD of Alexander’s Feast (Ludus Baroque) and a DVD of Les Troyens (Royal Opera).

Wyn-Rogers enjoys a prolific concert career, including appearances with all the major British orchestras, with period ensembles including The English Concert, the Academy of Ancient Music and The Sixteen, and at the Three Choirs, Edinburgh and Aldeburgh festivals and the BBC Proms. She has sung in recital at the Wigmore Hall among many other venues. Her many recordings range from Handel’s Samson and Messiah with Harry Christophers to Poulenc songs with Malcolm Martineau. She lives in Gloucestershire, where she is active in local music.

This entry was posted in OPera and tagged London, Richard Wagner, Royal Opera House, The Flying Dutchman. Bookmark the permalink.