The opera Eugene Onegin at the Croatian National Theater in Zagreb

On Tuesday, January 13 and 14, 2015  the CNT Opera performed P.I. Tchaikovsky’s famous opera Eugene Onegin with Niksa Bareza as conductor and in the stage direction of Michał Znaniecki who is also the costume designer. Luigi Scoglio is the set designer, Diana Theocharidis the choreographer and Bogumił Palewitcz the light designer. The upcoming performances are scheduled for January  24, 2015 and February 2 and 24, 2015.

Like most Russian composers from the period of Romanticism, even the greatest among them, Pyotr Ilych Tchaikovsky based some of his stage works on the works of the Russian romanticist Alexandre Sergeyevich Pushkin. One of the most beautiful creations of the romantic opera opus has been created after Pushkin’s novel in verse Eugene Onegin. A very few operas have such perfectly fused and inseparable two most important components, music and text. Tchaikovsky set to music Pushkin’s exceptional literary model almost in a perfect manner, breathing into it some entirely specific components which, according to many, make this most beautiful Slavic opera very demanding and challenging.

In it Tchaikovsky finally achieved a complete realisation of his yearnings in construction of a stage work. The opera plot is initiated by lyrical emotions experienced by its characters turning Onegin into a real intimate psychological drama. After Onegin, the operas took another direction and it is no wonder that this work was one of the first opera staging of the great Russian theatre master Konstantin Stanislavsky.

The opera focuses on the deeply experienced drama of its protagonists, subduing the exterior events and thus giving up the cliché of only one dramatic peak, since the first act is the drama of Tatyana, the second that of Lensky and the third that of Onegin. Every act is a separate whole, but all three of them are tightly connected into a single unity.

Tchaikovsky gave this work a crossheading, Lyrical scenes, and thus created a prototype of a psychological opera in which music does not describe, but deepens the presented events. Although the work is titled after the young, indifferent and rich Eugene Onegin, the main character is the dreamlike girl Tatyana who, living far deep in the Russian province of the 19th century, yields to the fantasies, idealising a random acquaintance Onegin unworthy of her true love. The author, beside Tatyana who is his favourite character, describes the poet Lensky, Onegin’s friend whom he kills in a duel because of a whim, with a lot of fancy.

In a combination of personal tragedies of the characters, it is possible to recognise a characteristic idea of the author on the weakness of man in achieving happiness that everyone craves for. Lensky’s aria before his death, and the famous night scene in which Tatyana is writing a love letter to Onegin, are considered among the most beautiful music numbers in the Slavic opera literature. 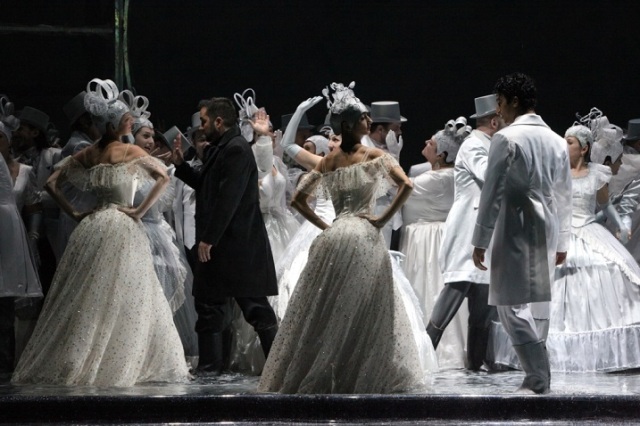 This title was first performed at the Zagreb Opera in 1897 (the first translation by Duro Devic, followed by Ferdo Miler, Milutin Cihlar Nehajev and Stanko Gasparovic). The performance had seven productions until today (1910, 1923, 1932, 1939 1956, 1965 and 1998.). In December 2014, the performance shall be performed at the Croatian National Theatre Ivan noble Zajc in Rijeka