La Traviata at the Gran Teatre de Liceu in Barcelona

La traviata is unique in Verdi’s output. Unlike Aida or Nabucco, it is remarkable for its realistic portrayal of the tale of Violetta who, on her deathbed, recalls her life as a courtesan in flashback form. In it Verdi made a head-on attack on the hypocritical society that censured his relationship with Giuseppina Strepponi. He also exalted human life and virtues such as generosity, compassion and selflessness, which are negated by the implacable judgement of a class-dominated society. In this adaptation of the novel by Alexander Dumas son, La dame aux camélias, he made subversive references to topics that were outlawed at the time (syphilis and tuberculosis). This, and his moral stance, aroused a storm of fury at the opera’s first showing. Now David McVicar’s masterly version, featuring his usual dramatic and highly-charged mise en scene, offers a contemporary re-reading. A grandiose melodrama in a period setting. 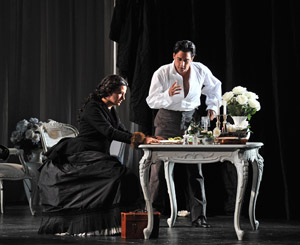 Opera in three acts. Libretto by Francesco Maria Piave based on La dame aux camélias by Alexandre Dumas Fils. Music by Verdi. Premiered on 6 March 1853 at the Teatro La Fenice. First Liceu performance on 25 October 1855. Last staged at the Liceu on 16 January 2002.

Symphony Orchestra and Chorus of the Gran Teatre del Liceu 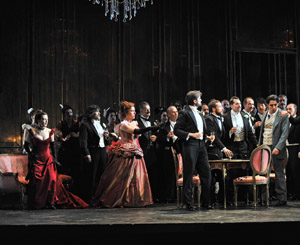 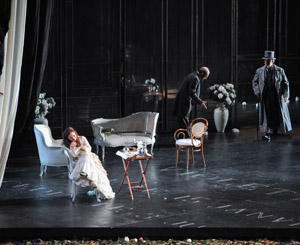 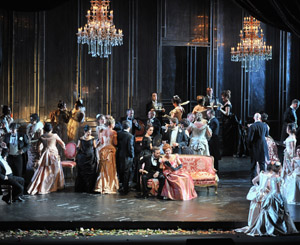 * The tenor Leonardo Capalbo will sing the role of Alfredo Germont on 28 October, replacing Ismael Jordi.

La Traviata takes pace in bedrooms and salons, not in palaces! As we researched this production, the de- signer and I visited whatever locations still existed of the original Dumas novel and we were struck by the intimate scale of the world Alphonsine Plessis moved in. The over-blown proportions which have become traditional to stagings of La traviata bear little rela- tionship to the reality of the Parisian demimonde of the 19th Century. Violetta’s party in Act One (no-one should forget, held with the precise purpose of cel- ebrating the triumph over yet another close call with death and, in a sense to display her still seductive wares to the public) happens in a small, four roomed apartment. Luxurious certainly, but no palatial salon.

The women onstage are not contessas and duch- esses but courtesans, actresses, dancers and the women who service them; milliners, dressmakers, maids, pimps. No respectable woman could possibly be seen at one of Violetta’s parties. The men present are, naturally of a higher class than the women. The purpose of the demimonde was to provide the en- tertainment, relaxation, excitement and (for a young man like Alfredo) sexual tuition to men of certain status and financial means. The enigmatic figure of Dr Grenvil, too can only be really understood in this context. His real-life 19th century counterpart was a certain Dr Koreff, struck-off and eking out a living as an abortionist and physician of venereal disease to the courtesans and their clients.

This production seeks deliberately to strip La traviata of extraneous decorative detail, setting the piece in period but within a dark sequence of small, suffocat- ing spaces. Like her short life, Violetta’s options are few and contained. The inevitability of her death is already etched across the floor of the set in the stark letters of the epitaph on her tomb.