The Marriage of Figaro at the Oper Frankfurt

The Marriage of Figaro

Sung in Italian with German surtitles
Duration c. 3hrs 30 mins, including one interval

A mad day in Count Almaviva’s castle: preparations for Figaro and Susanna’s wedding begin in the morning but a faked letter, people pretending they are going away, forcing doors open, jumping out of windows and dressing up as one another mean that the pair have to wait until the next break of dawn before they are united. The count, thinking he is about to, at long last, enjoy a bit of hanky-panky with Susanna, finds himself back in the arms of none other than his wife. The rest of the day is filled with desperate attempts to prevent the wedding taking place and equally determined efforts to ensure that it does. The opera was based on Beaumarchais’ sociocritical comedy – aimed to show up the “Vice, abuse and capriciousness carried out under the masks of the ruling classes”. Whilst adapting this »delicate« subject, which turned out to be one of the harbingers of the French revolution, Mozart and Lorenzo Da Ponte managed to communicate the swings between serious and amusing scenes. Fine portraits of characters come to life and there is real situation comedy during the intrigue filled story. It was the refreshing liberality of the figures as well as politically explosive texts that lent the French original a scandalous aura. The real fun in Mozart’s comedy comes from the impudence of the retainers and their lack of respect for their masters. Despite all the turmoil during a completely crazy day everything turns out all right in the end.

* Member of the Opera Studio 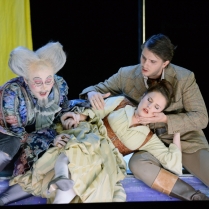 ACT 1
Susanna tells Figaro that the Count has offered her a dowry if she will allow him his fuedal rights and be the first man to sleep with her. Figaro intends to to thwart the Count’s plans. Another problem arises: Marcellina made Figaro promise that he would marry her on a particular day (today) if he failed to repay a sum of money. She and Bartolo, Figaro’s enemy, intend to make him keep his word. Cherubino, a page in love with the Countess, has been banished by the Count for being found alone with Barbarina. He begs Susanna to ask the Countess to intercede on his behalf. The Count arrives. Cherubino hides. The Count tries to convince Susanna of his affections but is interrupted by Don Basilio. He hides. Basilio accuses Susanna of flirting with the Count and Cherubino. When he tells her to warn Cherubino not to make his infatuation for the Countess so obvious the furious Count makes his presence known. He demonstrates how he found Cherubino and Barbarina hiding under a table and… The Count orders Cherubino to leave. Figaro and Susanna beg for leniency. The Count sends him to join the army instead. Figaro commiserates with the boy that instead of pestering the girls he will now have to march through mud.

ACT 2
The Countess is miserable about her husband’s indifference. Figaro has a plan to make the Count jealous: he will ensure that he finds out about a rendezvous the Countess (Susanna in disguise) is planning with her lover and let it be known that Susanna (Cherubino in disguise) will agree to meet the Count in the garden. The Count arrives. He has heard about his wife’s lover and is livid with rage. Cherubino and Susanna hide. The Countess swears she is alone except for her maid, who is trying on a dress next door, but refuses to let him go and check. He orders her to accompany him to fetch tools to break open the door and locks the room. Cherubino jumps from the balcony. Susanna hides. The Count and Countess are astonished to find Susanna. The Count apologises. Antonio, the gardener says that a flower pot was broken by a man leaping from the balcony. Figaro says it was him. Hoping to see Susanna, he panicked when he heard the Count’s voice. Antonio also found some papers. The Count asks Figaro what they contain. The ladies manage to tell him that it is Cherubino’s commission, which had not been sealed. Marcellina arrives with Don Curzio and demands that the Count make Figaro keep his word.

ACT 3
The Countess urges Susanna to make an assignation with the Count. He is delighted at Susanna’s apparent change of heart. She agrees to meet him in the garden in return for the dowry, which she intends to use to repay Figaro’s debt. Figaro tells Marcellina that he can’t marry without his parents consent – but does not know who they are. When Marcellina sees a birthmark on his arm it she realises he is her long lost child. She tells him that Bartolo is his father. Susanna is furious when she sees Figaro hugging Marcellina until she finds out that she is his mother. A double wedding is planned. Barbarina has dressed Cherubino as a village girl. The Countess longs for things to be as they were when the Count loved her. The Countess dictates a letter to Susanna saying where she will meet the Count. The Countess now intends to disguise herself as Susanna. The letter is sealed with a pin, which the Count is to return to Susanna as a sign that he has read it. Cherubino is unmasked and ordered to leave by the Count. Barbarina reminds him that he promised she could have anything she wanted in return for some kisses, and she wants Cherubino. The weddings can take place. Susanna gives the Count the letter. He pricks his finger on the pin, which drops to the floor. Figaro laughs, little knowing that the letter is from Susanna.

ACT 4
Barbarina is trying to find the pin. Figaro is horrified when she tells him that she needs it so that she can return it to Susanna on behalf of the Count. Figaro decides to set a trap for his bride and hides. The Countess, Susanna and Marcellina know he is watching. Susanna make him jealous by singing of her lover, the Count. The ladies withdraw to swap clothes. Cherubino finds the Countess (dressed as Susanna). The Count steps between them as Cherubino tries to kiss her. The Count flirts with „Susanna“ – they hear a sound and rush off in opposite directions. Figaro approaches Susanna (dressed as the Countess) to tell her what he has seen. Her voice gives her away. He realises that it is Susanna, not the Countess. He flirts with her and Susanna boxes his ears. He says he loves her and she forgives him. Seeing the Count looking for Susanna, they decide to arouse his jealousy by continuing to flirt with each other. The Count calls for everyone to come and witness what his wife has been up to. He refuses his „wife’s“ pleas for forgiveness until the Countess appears and he realises that it was she, not Susanna, who had come to meet him. After all has been revealed the Count feels suitably ashamed and asks his wife to forgive him, which she does. Everybody prepares to celebrate.