Don Giovanni at the Met

World premiere: National Theater (now Estates Theater), Prague, 1787. Aided by his ingenious librettist, Lorenzo Da Ponte, Mozart approached his operatic retelling of the Don Juan myth from a point of view that is neither tragic nor entirely comic, but rather lighthearted, urbane, and ironic. We follow the title character and his earthy comic sidekick, Leporello, through a series of encounters that begins with a fatal duel, moves back and forth between the humorous and the sentimental, and ends with the protagonist being dragged down to hell. 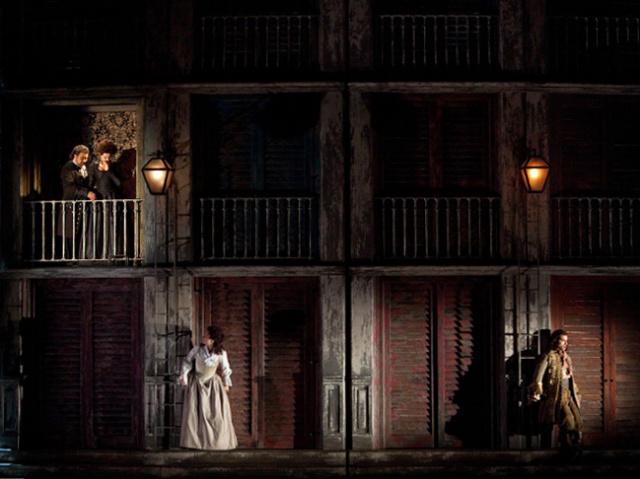 The city of Seville in southern Spain, where Mozart originally set his opera, was already famous in his time as a mythical world of winding streets, hot-blooded young men, and exotically beautiful women sequestered behind latticed windows. The Met’s production places the action in an unnamed Spanish city in the mid-18th century. 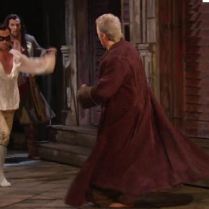 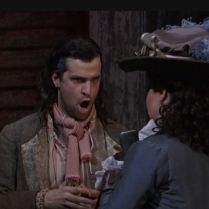 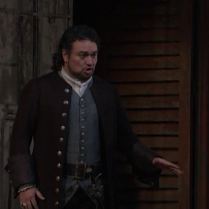 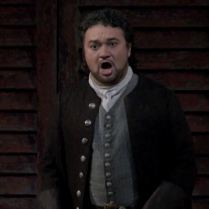 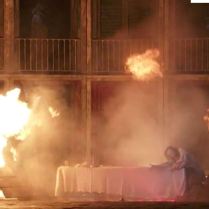 In the morning, Giovanni and Leporello encounter one of Giovanni’s former conquests, Donna Elvira, who is devastated by his betrayal. Leporello tells her she is neither the first nor the last woman to fall victim to Giovanni and shows her his catalogue with the name of every woman Giovanni has seduced.

Peasants celebrate the marriage of Masetto and Zerlina. Giovanni flirts with the bride, telling her she is destined for a better life. But Elvira urges Zerlina to flee her suitor. She also warns Anna, who is still unaware of the identity of her father’s murderer and has asked Giovanni for help in finding the man. Giovanni, for his part, insists that Elvira is mad, and Anna and Ottavio wonder what to believe. As Giovanni leaves, Anna suddenly recognizes his voice as that of the murderer. Devastated but determined, she once more asks Ottavio to avenge her. He wonders how to restore her peace of mind. Giovanni, who has invited the entire wedding party to his home, looks forward to an evening of drinking and dancing.

Outside Giovanni’s home, Zerlina asks Masetto to forgive her. Giovanni enters and leads them both inside. Anna, Elvira, and Ottavio appear masked and are invited in by Leporello. In the ballroom, Giovanni dances with Zerlina, then tries to drag her into the adjoining room. When she cries for help, Giovanni blames Leporello. Anna, Elvira, and Ottavio take off their masks and, along with Zerlina and Masetto, accuse Giovanni, who is momentarily surprised but manages to slip away.

Having exchanged clothes with Giovanni, Leporello takes Elvira on a nighttime walk, leaving his master free to serenade her maid. When Masetto arrives with a band of peasants to hunt down Giovanni, the disguised Don sends them off in various directions, then beats up Masetto. Zerlina finds her bruised fiancé and comforts him.

Later that night, Leporello—still believed by Elvira to be Giovanni—is surprised by Anna, Ottavio, Zerlina, and Masetto, who all denounce the supposed Don. Fearing for his life, Leporello reveals his true identity before making his escape. Ottavio proclaims that he will take revenge on Giovanni and asks the others to look after Anna. Elvira thinks about Giovanni, whom she still loves in spite of everything.

In a cemetery, Giovanni and Leporello meet the statue of the Commendatore, who warns Giovanni that by morning he will laugh no longer. Giovanni forces the terrified Leporello to invite the statue to dinner. The statue accepts.

Once again, Ottavio asks Anna to marry him, but she replies that she will not until her father’s death has been avenged.

Elvira arrives at Giovanni’s home. She makes a last desperate attempt to persuade him to change his life, but he only laughs at her. The figure of the Commendatore enters and asks Giovanni to repent. When he boldly refuses he is consumed by flames. Elvira, Anna, Ottavio, Zerlina, Masetto, and Leporello appear, contemplating their futures and the fate of an immoral man.

Tenor Matthew Polenzani is one of the most gifted and distinguished lyric tenors of his generation. His elegant musicianship, innate sense of style and dramatic commitment find him at virtually every leading operatic, concert and recital venue in the world.

Mr. Polenzani’s 2015/2016 season opens with his return to the Opéra National de Paris as Ottavio in Michael Haneke’s acclaimed Don Giovanni. The tenor is Werther at the Bayerische Staatsoper in Munich and again in Vienna, at the Vienna Staatsoper. 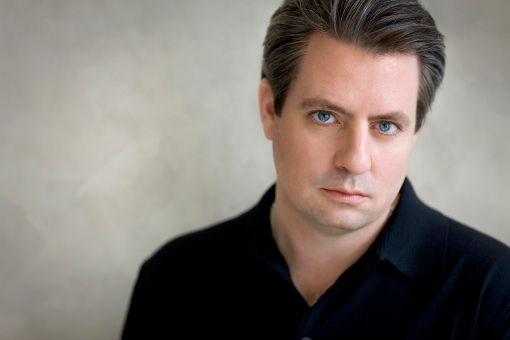 The Metropolitan Opera in New York has been, and continues to be his artistic home, and he returns there to star in two new productions. He will sing Nadir, in Le Pêcheurs de Perles, and sings the title role in Roberto Devereux, in a production by Sir David McVicar, with both operas being featured on the Met’s Live in HD series, broadcast to more than 2000 movie theaters worldwide. Mr Polenzani also makes his debut at the Gran Teatre del Liceu Barcelona singing Rodolfo in Puccini’s La Bohème. In concert, Mr Polenzani essays Die Schöne Müllerin at Northwestern University, as part of the opening season in the brand new Mary B. Galvin Recital Hall, with Alan Darling at the piano. He will reprise the work with Julius Drake, in a Liederabend in Frankfurt at Oper Frankfurt.

In the 14/15 season, the tenor was Idomeneo in a new production of Mozart’s masterpiece at London’s Royal Opera. He sang Hoffmann in Les Contes d’Hoffmann, under the baton of James Levine at the Metropolitan Opera. Mr. Polenzani reprised his Nemorino in L’elisir d’amore, and added Tamino in Die Zauberflöte, to his repertory at the Bayerische Staatsoper. He also made his debut at the Opernhaus Zürich, as Alfredo in Verdi’s La Traviata. Concert appearances included Beethoven’s Ninth Symphony, with the Chicago Symphony Orchestra, conducted by Riccardo Muti, and Verdi’s Requiem, at Teatro alla Scala in Milan, with Riccardo Chailly conducting, and a New Year’s Eve Gala Concert in Venezia, with Maria Agresta, and Daniel Harding conducting. Mr. Polenzani also returned to the Festival Musique et Vin au Clos Vougeot, in a duo concert with Soprano Marlis Petersen, under Maurizio Benini’s baton. Pianist Julius Drake accompanied the tenor in a widely acclaimed 10 city recital tour, culminating at London’s famed Wigmore Hall. 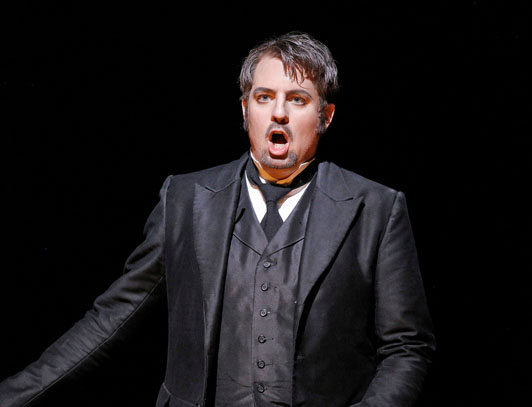 Following Matthew Polenzani’s debut as Gérald in Delibes’s Lakmé with Opéra National de Bordeaux in France in 1998, appearances in other major European theaters include productions of Don Pasquale and La Traviata at the Teatro Comunale in Florence, the Aix-en-Provence Festival (DVD available on Bel Air Classiques) and on a tour of Japan with Torino’s Teatro Regio; I Capuleti e I Montecchi at the Paris Opera and Bayerische Staatsoper; L’elisir d’amore at the Vienna Staatsoper, Bavarian Staatsoper, Teatro San Carlo and Teatro dell’Opera di Roma; Così fan tutte at Covent Garden with Sir Colin Davis and in Paris with Philippe Jordan; Lucia di Lammermoor in Paris, Vienna and Frankfurt; La Damnation de Faust at Frankfurt Opera and Berlin at the Deutsche Oper; Manon, in London, and on a tour of Japan with the Royal Opera House, Covent Garden; Idomeneo in Torino with Gianandrea Noseda, Manon with Fabio Luisi and La traviata at La Scala; Rigoletto at the Vienna State Opera conducted by Jesus Lopez-Cobos, and at the Salzburg Festival in Don Giovanni (DVD available on EuroArts).

In recital, Matthew Polenzani has appeared in numerous venues across America with Julius Drake, and at Wigmore Hall (available on CD from the Wigmore Hall label). He has also appeared with noted pianist Richard Goode in a presentation of Janáček’s The Diary of One Who Vanished at Carnegie’s Zankel Hall, and in recital at the Verbier Festival with pianist Roger Vignoles (commercially available on CD on VAI). Mr. Polenzani was honored to have sung on all three stages of Carnegie Hall in one season: in concert with the MET Chamber Ensemble at Zankel Hall; in solo recital with James Levine at the piano in Weill Hall; and in a Schubert Liederabend on the stage of Isaac Stern Auditorium with colleagues Renée Fleming, Anne Sofie Von Otter, and René Pape, again with James Levine as pianist.

Matthew Polenzani was the recipient of the 2004 Richard Tucker Award and Metropolitan Opera’s 2008 Beverly Sills Artist Award. An avid golfer, he makes his home in suburban New York with his wife, mezzo-soprano Rosa Maria Pascarella and their three sons.