Posted on November 2, 2013 by editoreusa

Stefano Donaudy (Palermo, February 21, 1879 – Naples, May 30, 1925), son of a French father and an Italian mother, was a minor Italian composer active in the 1890s and early 20th century, at a time when Palermo, his native city, was enjoying a period of relative splendor under the influx of rich Anglo-Sicilian families such as the Florios and the Whitakers. 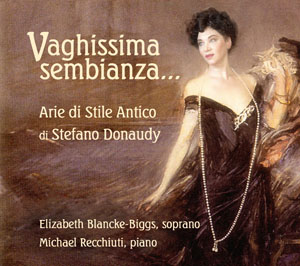 No biographical or musicological studies have so far been devoted to him, but it seems that Donaudy was very precocious, as a variety of sources date both his first opera Folchetto and one of his most popular songs, Vaghissima sembianza, to 1892, when he was only thirteen.

After studies with the director of Palermo’s Conservatoire, Guglielmo Zuelli (a rival of Giacomo Puccini in his early years), it seems that Donaudy made a living as singing teacher, coach and accompanist for some of Sicily’s wealthiest families, all while actively pursuing a career as a composer. He wrote mostly vocal music, dividing his efforts between opera and song, though he did also write chamber and orchestral music. Practically all his song texts and libretti were supplied by or written at four-hands with his brother, Alberto Donaudy (1880–1941), a poet whose style reflects the prevailing literary tastes of the period, from Arrigo Boito and Gabriele D’Annunzio to Guido Gozzano.
Today, Donaudy’s fame rests exclusively on his collection 36 Arie di Stile Antico, first published by Casa Ricordi in 1918 with revisions in 1922, but using material composed from 1892 onward. It’s still currently in print. Several of its songs have never disappeared from the concert repertoire of Italianate opera singers, and titles such as Vaghissima sembianza, Spirate pur, spirate, O del mio amato ben and the beautiful Amorosi miei giorni, have been given unforgettable renditions on record by singers like Enrico Caruso, Beniamino Gigli, Tito Schipa, Claudia Muzio, Luciano Pavarotti, Rosa Ponselle and more recently people like Arleen Augér, Marcello Giordani, Sumi Jo and Andrea Bocelli. All these songs reveal a perfect mastery of vocal technique and a deeply sensuous and elegant melodic vein, which make them a worthy testimony of that particular variant of Art Nouveau spirit known in Italy as Stile Liberty. Perhaps, the quickest way to epitomise Donaudy is calling him an Italian equivalent of Reynaldo Hahn.
The rest of his production is completely forgotten. This includes the operas Folchetto (Palermo, 1892), La scampagnata (Palermo, 1898), Teodoro Koerner (Hamburg, November 27, 1902 as Theodor Körner), Sperduti in buio (Palermo, April 27, 1907) and Ramuntcho (from Pierre Loti, Milan, March 19, 1921). Donaudy’s final opera was premiered at the Teatro di San Carlo in Naples on April 25, 1922: La Fiamminga was an unmitigated fiasco, and Donaudy was so hurt that he abandoned composition for the rest of his life. He died three years later, when he was barely forty-six.
Even less information is available on the rest of his output, which seems to include a cantata Il sogno di Palisenda, written before 1902, one symphonic poem, several smaller works for orchestra and «a quartet of compositions» for violin and piano.
(Text from the first page of Ricordi’s 36 Arie Di Stile Antico)

Watch the documentary by Maestro Michael Recchiuti on the composer: