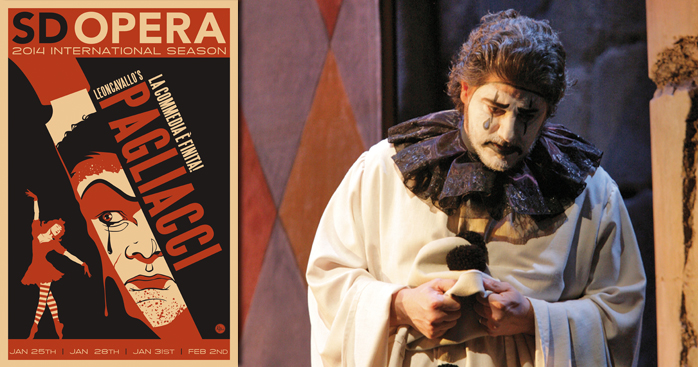 “Crazed clown murders wife in front of live audience” is what the headlines would have screamed after the jealous Canio stabs his wife Nedda and her lover to death in a jealousy-driven rage while performing a comedy before an audience of shocked Italian villagers.

One of the most powerful operas in the repertoire, Pagliacci is gut-wrenching as Tonio, a member of the traveling troupe of players rejected by Nedda, sees her with another man and tells Canio how to get vengeance. In the famous aria “Vesti la giubba”, Canio applies his clown make-up saying that the show must go on, but creates his own tragic ending.

The running time is approximately 1 hour and 18 minutes with no intermission. There will be no late seating.
Sung in Italian with English translations displayed above the stage.

In the Prologue, Tonio the clown steps before the curtain to announce that the author has written about actors, who know the same joys and sorrows as other people.

Villagers mill around as a small theatrical road company arrives at the outskirts of a Calabrian town. Canio, head of the troupe, describes that night’s offering, and when someone jests that the hunchbacked Tonio is secretly courting his wife, Nedda, Canio warns that her fidelity is no joking matter. Vesper bells call the women to church and the men to the tavern, leaving Nedda alone. Disturbed by her husband’s vehemence and suspicious glances, she envies the freedom of the birds soaring overhead. Tonio appears and tries to make love to her, but she laughs at him. Enraged, he reaches for her, and she lashes out with a whip. Nedda in fact does have a lover — Silvio, who now appears and persuades her to run away with him after the evening’s performance. But Tonio, who has seen them, hurries off to tell Canio. Soon the jealous husband bursts in. Silvio escapes, and Nedda refuses to identify him, even when threatened with a knife. Beppe, another player, restrains Canio, and Tonio advises him to wait until evening to catch Nedda’s lover. Alone, Canio cries out that he must play the clown though his heart is breaking.

The villagers, Silvio among them, assemble to see the play Pagliaccio e Colombina. In the absence of her husband, Pagliaccio (played by Canio), Colombina (Nedda) is serenaded by her lover Arlecchino (Beppe), who dismisses her buffoonish servant Taddeo (Tonio). The two sweethearts dine together and plot to poison Pagliaccio, who soon arrives; Arlecchino slips out the window. With pointed malice, Taddeo assures Pagliaccio of his wife’s innocence, firing Canio’s real-life jealousy. Forgetting the play, he demands that Nedda tell him her lover’s name. She tries to continue with the script, the audience applauding the realism of the “acting.” Maddened by her defiance, Canio stabs Nedda and then Silvio, who has rushed forward to help her. The comedy is ended.