The Trojans in Berlin, with Roberto Alagna as Énée 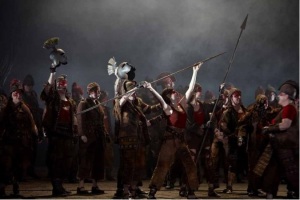 In French language with German surtitles 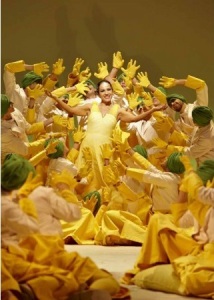 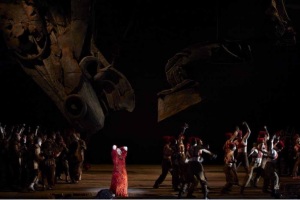 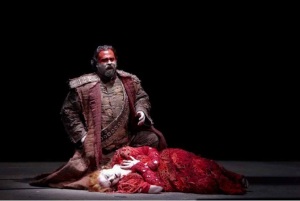 “I love the Ancients, regardless of their merits and deficits, because they are not like modern people, because they are new” explained Hector Berlioz, writing in September 1850 in Le journal des débats. A present-day sceptic, he was enthralled by ancient history from an early age and developed his own contemporary perspective on these tales of antiquity, seeing them as a constantly repeated round of victories and defeats.

In his double opera THE TROJANS, a huge, sweeping panorama, he weaves a web of individual destinies while creating overarching perspectives and ageless formats. Berlioz presents the horror of war, harnesses insight and helplessness as the twin drivers of a cruel epic, tells of love and renunciation, of guileless guilt and inexorable fate.

Shrieks of Trojan joy open this work that is so difficult to categorise, but appearances deceive. Cassandra warns in vain of the »gift of the gods«. She foresees catastrophe for Troy, a disaster linked to the wooden horse, but is powerless to prevent it. The spirit of Hector urges Aeneas to abandon Troy, overrun by the Greeks, and found a new nation in a distant land. While he and his men flee the burning city the women, on the instigation of Cassandra, commit suicide.

The “ownfall of Troy” is followed by the second part of the story, an episode of transition that looks to the future: “The Trojans in Carthage”. The surviving male Trojans lands in Carthage, where they give military assistance to the Carthaginians and thwart the attack of King Iarbas. This alliance is reflected on a personal level, too. Dido and Aeneas discover their love for each other, but their happiness is short-lived. The ghosts of the dead Trojans appeal to Aeneas to sally forth again and fulfil his mission as set out by Hector. When Dido realises that she cannot persuade her beloved Aeneas to stay, she climbs onto the pyre and kills herself. Before she dies she proclaims her vision of the future, conjuring up a never-ending bloodbath between Carthage and the descendants of Aeneas.

This work, created between 1856 and 1858 and erratic in its refusal to submit to the artistic parameters of its time, draws heavily on Virgil and Shakespeare. It is not the intention of this retrospective work to reproduce what has gone before but rather to point up new facets and cause the tales and forms of an earlier age to bear fruit in the present day. Although baroque and bel canto opera have left their mark on this work, Berlioz considers the conflict between gods – counterpointing the struggles of the mortals – to be irrelevant to his times and decidedly baroque in character and consequently leaves it out of THE TROJANS. Berlioz throws his lot in with conservative musical credos such as consonance, melody and closed form, yet he also clashes with convention by employing unusual rhythms and tonality. Despite its echoes of grand opéra, the work does not belong to the genre. The music is ever changing and developing; one hardly ever sees the repetition that one encounters in grand opéra. Here, too, Berlioz anticipates modern compositional principles. THE TROJANS insist on autonomy that, while it is open to a plethora of ideas, seeks enlightenment and form precisely through wrestling with these ideas. It is precisely these characteristics that equip them for the present.

“I sing of warriors’ deeds, of heroes and of him who, fleeing overland from the shores of Troy, arrived by divine intervention at Lavinium, on the coast of Italy. On land and on the high seas he was subjected to severe tests of his endurance by the Olympian powers and the unconciliatory wrath of a raging Juno. He also suffered much in wars before he was able to found his cities and bring his gods to Latium – whence the Latin people, our Albanian ancestors and the topless towers of Rome!
Muse, tell me why, for what outrage and for what insult, the Queen of the gods caused an eminently respectful man like Aeneas to endure so many reverses and to assert himself in the face of such hardship. Do the gods really have so much spite in their breasts? There was an ancient city, populated by settlers from Tyre, by the name of Carthage, a place beyond Italy, far from the mouth of the Tiber, rich in treasure and a serious threat to others, as evinced in its willingness to go to war. Juno is said to have rated this city higher than any other on earth, preferring it even to Samos. It was here that she had her weaponry, her chariots, and it was this city that the goddess always wanted to see in a position of dominance over nations, if fate would have this. In any event it was her aim to have a new dynasty of Trojan stock spring up, a dynasty that would one day raze the fortresses of Tyre. To the detriment of Libya, a nation would then appear, holding sway over all others and uncowed in war. So the Fates had determined.” (Virgil: Aeneis.) 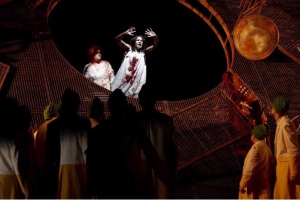 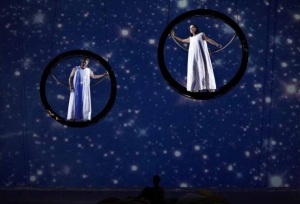