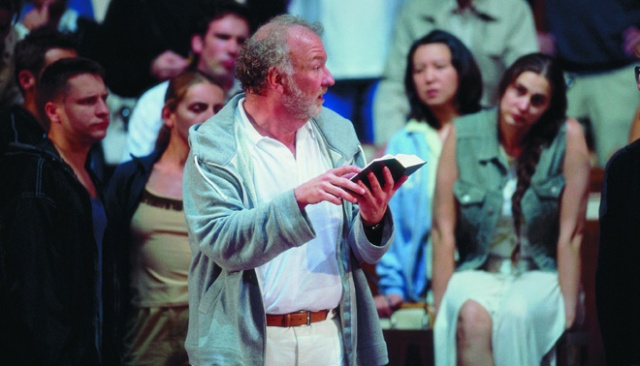 Imagine you’ve been told the most important thing man has ever been told. What you have been told will change the world and save mankind. You must now share what you have heard, you are God’s spokesperson on earth. Imagine, however, that you are overcome with despair that you find yourself unable to find the right words to communicate God’s will. This is Moses’ tragedy in Moses und Aron. It is impossible not to listen to Schoenberg’s ‘fragmentary masterpiece’ and not be stunned by his achievement. Moses und Aron reaches to the outer limits of what opera was capable of in the last century. It’s a sound so unique, so urgent that you might be forgiven for thinking that it has come down from heaven itself. Welsh National Opera is proud to stage this rarely performed opera in Sergio Morabito and Jossi Wieler’s highly charged production. Moses und Aron is a huge undertaking for both performers and audiences but the rewards will be extraordinary. Supported by the Colwinston Charitable Trust and The John S Cohen Foundation.

Based on an original design by Anna Viebrock

Moses hears the voice of God. It asks him to lead his people out of Egyptian servitude and to instil in them a belief in the One and Only. Moses quails at the task, pleading old age and the ‘clumsiness of his tongue’. The voice promises him the help of his brother Aron, whose words will work miracles in the minds of the people.

The two brothers, Moses and Aron, are both inspired and daunted by the divine mission. They struggle to find an explanation of that which cannot be explained: an understanding of the invisible and inconceivable God.

The news spreads that Moses has returned, together with Aron, in order to announce a new god. The people, who have suffered since Moses killed an Egyptian slave-driver, are apprehensive and fear retribution.

The people besiege Moses and Aron with questions about the new god. Their disappointment turns to rage when they are unable to understand that this god is invisible. Moses is frustrated when he is unable to explain how God can be perceived only within oneself but Aron tries to help the people understand by performing three miracles of transformation.

Aron interprets the miracle of the staff transforming itself into a snake as an allegory of divine law: spiritual flexibility is required for its understanding. Authority and intelligence, which are necessary qualities for leaders, are united in Moses and Aron. Moses’s hand, which appears leprous, is healed when he places it over his heart, where God dwells. Pouring Nile water, which appears to change to blood, Aron explains that the blood of the Hebrews has been nurturing the land of their oppressors for generations. God would free them and lead them to a land where milk and honey flow. The power of the Egyptians, however, would be washed away in the floods of the Nile.

Aaron’s inspired words reach the people’s hearts. They become aware of being chosen and, led by Moses and Aron, venture to begin the fight for freedom.

The people’s exodus from Egypt has led them into the wasteland. Moses has been on the mountain of revelation for forty days and has not yet returned. The people have lost their belief in him and want to turn away from the invisible god. Aron is unable to explain his brother’s actions. The people plead with the elders to be given back the old gods and their laws. Aron is ready for a compromise and prepares to provide them with an image of their longings and wishes.

Moses descends from the mountain. At his words, the image, created by Aaron, vanishes. Moses challenges his brother’s decision to act against the divine command. Aron insists on the people’s need of the image, which he had used to fill the vacuum Moses had left. For Moses, an existence without the idea of God seems worthless.

Aron argues that the laws which Moses has been given by God can only give the people a limited view, that they struggle to understand. In despair, Moses destroys the laws. Aron denounces him, saying that he will continue to keep the idea of God alive by putting it into words. He joins the people as they continue their journey to the promised land.

Moses is left behind. Aron has put words and images to that which cannot be expressed and has destroyed his brother’s absolute perception of God. For Moses, God has become silent. 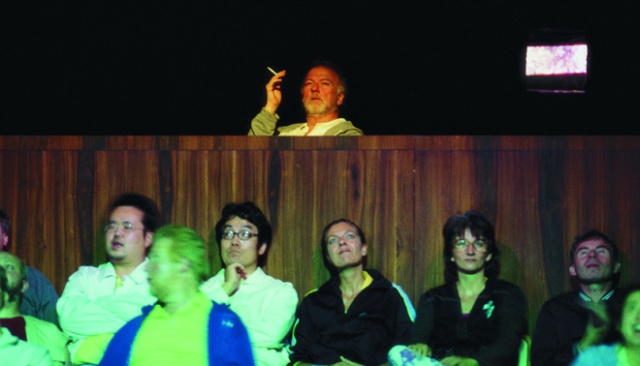 All performances start at 8pm.

Sung in German with surtitles in English (and Welsh in Cardiff).

Free pre-performance talks
Prior to every performance of Moses und Aron and Nabucco.

The Whole Story
Thursday 22 May – Tuesday 3 June
The Whole Story is the perfect introduction to the Faith season. Before the performances begin, our team of experts will guide you through the music, stories and background to each opera.