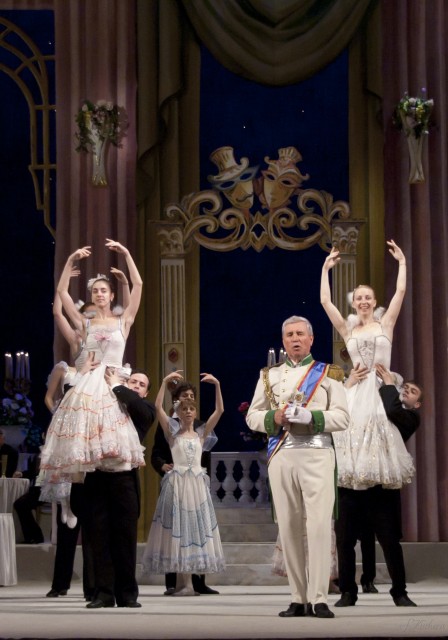 Gabriel von Eisenstein has been sentenced to eight days in prison for insulting an official, partially due to the incompetence of his attorney, Dr. Blind. Adele, Eisenstein’s maid, receives a letter from her sister, who is in the company of the ballet, inviting her to Prince Orlofsky’s ball. She pretends the letter says that her aunt is very sick, and asks for a leave of absence (“My sister Ida writes to me”). Falke, Eisenstein’s friend, arrives to invite him to the ball (Duet: “Come with me to the souper”). Eisenstein bids farewell to Adele and his wife Rosalinde, pretending he is going to prison (Terzett: “Oh dear, oh dear, how sorry I am”) but really intending to postpone jail for one day and have fun at the ball.

After Eisenstein leaves, Rosalinde is visited by her lover, the singing teacher Alfred, who serenades her (“Dove that has escaped”). Frank, the governor of the prison, arrives to take Eisenstein to jail, and finds Alfred instead. In order not to compromise Rosalinde, Alfred agrees to pretend to be Eisenstein and to accompany Frank. (Finale, drinking song: “Happy is he who forgets” followed by Rosalinde’s defence when Frank arrives: “In tête-à-tête with me so late”and Frank’s invitation: “My beautiful, large bird-cage.”) 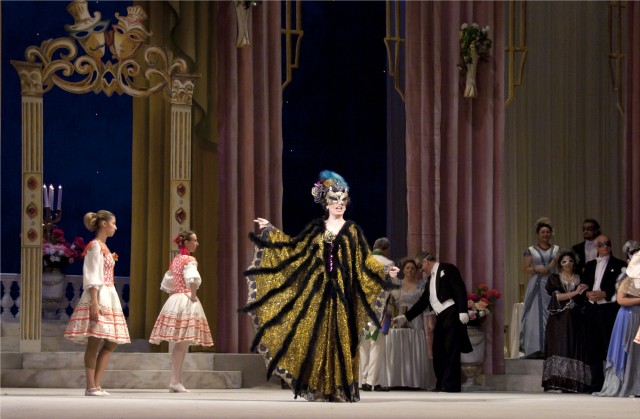 A summer house in the Villa Orlovsky

It turns out that Falke, with Prince Orlofsky’s permission, is orchestrating the ball as a way of getting revenge on Eisenstein. The previous winter, Eisenstein had abandoned a drunken Falke dressed as a bat (and thus explaining the opera’s title) in the center of town, exposing him to ridicule the next day. As part of his scheme, Falke has invited Frank, Adele, and Rosalinde to the ball as well. Rosalinde pretends to be a Hungarian countess, Eisenstein goes by the name “Marquis Renard,” Frank is “Chevalier Chagrin,” and Adele pretends she is an actress.
The ball is in progress (Chorus: “A souper is before us”) and the Prince welcomes his guests (“I love to invite my friends”). Eisenstein is introduced to Adele, but is confused as to who she really is because of her striking resemblance to his maid. (“My lord marquis,” sometimes referred to as “Adele’s Laughing Song”).
Then Falke introduces the disguised Rosalinde to Eisenstein (Csárdás: “Sounds from home”). During an amorous tête-à-tête, she succeeds in extracting a valuable watch from her husband’s pocket, something which she can use in the future as evidence of his impropriety. (Watch duet: “My eyes will soon be dim”). In a rousing finale, the company celebrates (The Drinking song: “In the fire stream of the grape”; followed by the canon: “Brothers, brothers and sisters”; and the ballet and waltz finale, “Ha, what joy, what a night of delight.”) 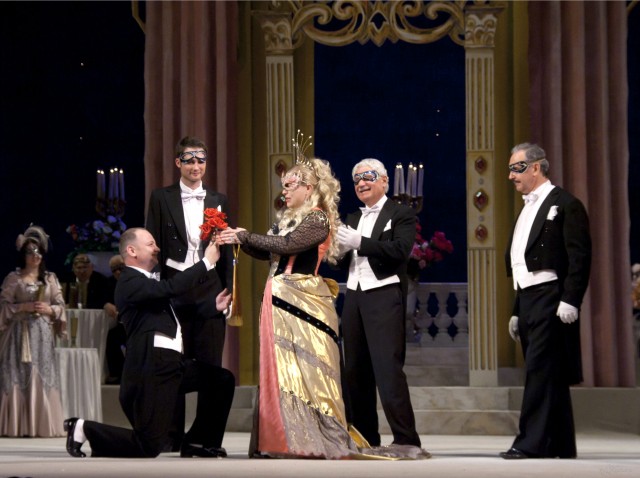 In the prison offices of Governor Frank

The next morning they all find themselves at the prison where the confusion increases and is compounded by the jailer, Frosch, who has profited by the absence of the prison director to become gloriously drunk.
Adele arrives to obtain the assistance of the Chevalier Chagrin (Melodrama; Couplet of Adele: “If I play the innocent peasant maid”) while Alfred wants nothing more than to get out of jail. Knowing of Eisenstein’s trickery, Rosalinde wants to begin an action for divorce, and Frank is still intoxicated.
Frosch locks up Adele and her sister Ida, and the height of the tumult arrives when Falke appears with all the guests of the ball and declares the whole thing is an act of vengeance for the “Fledermaus”. (Trio between Rosalinde, Eisenstein, Alfred: “A strange adventure”). Everything is amicably arranged (with Eisenstein blaming the intoxicating effects of champagne for his act of infidelity and Orlofsky volunteering to support Adele’s artistic career), but Eisenstein is compelled to serve his full term in jail (Finale, “Oh bat, oh bat, at last let thy victim escape”).

This entry was posted in OPera and tagged Die Fledermaus, Johann Strauss, Moldova. Bookmark the permalink.