“Nabucco” performed by the Israeli Opera

Verdi’s “Jewish” opera showcases who destroys the temple in Jerusalem and exiles the Israelites to Babylon where they sing the immortal slave chorus. Verdi’s true first operatic success returns to the Israeli Opera in a new production conducted by Daniel Oren. 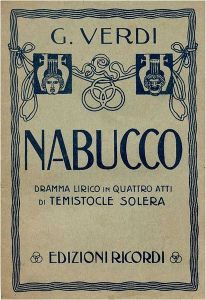 Part I | Jerusalem
Thus said the Lord: Behold, I shall deliver this city into the hands of the King of Babylon, and he will destroy it by fire (Jeremiah, 34:2)

In the Temple of Solomon in Jerusalem, the Israelites bewail their fate: Nabucco (Nebuchadnezzar), King of Babylon, has attacked them with his hordes and is desecrating the city. As they offer payers, Zaccaria, the High Priest, enters with his sister Anna and Nabucco’s daughter, Fenena, whom the Jews are holding hostage. He counsels his people to remain steadfast as peace is within their reach, and reassures them that the Lord will not forsake them. Ismaele, nephew of the King of Jerusalem and leader of the military forces, enters with soldiers to say Nabucco is sweeping all before him.
Zaccaria hopes for a miracle and hands over Fenena to Ismaele for safekeeping. When the others leave we learn that Ismaele and Fenena, who had met in Babylon, are in love. Fenena’s jealous sister Abigaille, was in love with Ismaele too. As they talk, Abigaille bursts in, wearing warrior garb, leading a band of Babylonians (disguised as Hebrew soldiers) to occupy the Temple. She greets Ismaele with scorn, then privately tells him he can save his people and earn a new kingdom if he returns her love. Saying he cannot, he offers to forfeit his life for his people, while Fenena prays to the God of Israel to shield Ismaele. The Israelites reappear, frightened because Nabucco is approaching. As the conqueror enters the Temple, Zaccaria confronts him, denouncing his blasphemous arrogance and threatening to stab Fenena. But Ismaele wards off Zaccaria’s blow and delivers Fenena to her father. As Zaccaria and the other Jews revile Ismaele, Nabucco orders the Temple looted and burned.

Part II | The Impious one
Behold, the storm of the Lord goes forth in fury, a raging tempest; it shall whirl down upon the head of the wicked (Jeremiah, 30:23)

In Nabucco’s palace in Babylon, Abigaille has found a document that could cause her ruin, since it certifies that she is not Nabucco’s daughter but the child of slaves. She swears vengeance on Nabucco and his appointed heiress, Fenena, but wistfully reflects that the love she felt for Ismaele could have changed her life. The High Priest of Baal comes to say that Fenena has freed the Israelites prisoners. The religious authorities have decided to offer Abigaille the throne instead, telling the people that their king has fallen in battle. She rejoices that the daughter of slaves will now have everyone at her feet. Elsewhere in the palace, Zaccaria prays for the ability to persuade the Babylonians to put aside their false idols. He will begin by converting Fenena, whose apartment he enters. Two Levites, sent for by Zaccaria, appear and are surprised to meet the outcast Ismaele. As they upbraid him, Zaccaria, accompanied by Fenena and Anna, pardons Ismaele, for he has saved a fellow Hebrew – the newly converted Fenena. The aged palace adviser Abdallo rushes in to tell Fenena about the reports of the king’s death and to warn that her life is in danger. Before she can escape, the High Priest of Baal, followed by Abigaille and a crowd of Babylonians, proclaims Abigaille ruler and pronounces a death sentence on the Hebrews. When Abigaille demands the royal scepter, Fenena refuses to yield it. At that moment, to the astonishment of all, Nabucco enters, takes the crown and places it on his own head. Everyone trembles in dread before the irate monarch, who announces he is not only king but god, having overthrown both Baal and the God of the Israelites. As he tries to force Zaccaria and Fenena to prostrate themselves before him, lightning strikes him and knocks the crown from his head; it also renders him insane. Abigaille retrieves the crown.

Part III | The Prophecy
Babylon shall become rubble, a den for jackals, an object of horror and hissing without inhabitant (Jeremiah, 51:37)

Scene i
In the Hanging Gardens of Babylon, the High Priest of Baal and the crowd hail Abigaille as ruler. The High Priest presses her to put the Israelites to death, but before she can sign the warrant, the disheveled Nabucco wanders in, hoping to sit once more on his throne. Abigaille dismisses the others and explains to Nabucco that she is now serving as regent, since he is not well enough to rule; she gives him the warrant, hoping to trick him into ordering his own daughter’s death. When she taunts him for lack of resolution, he signs. Then Nabucco remembers Fenena. She too will die, retorts Abigaille. When Nabucco looks for the document proving Abigaille to be an imposter, she confronts him with it and tears it to pieces. Nabucco calls the guards but learns they are no longer faithful to him; their orders are to keep him locked up. His pleading with Abigaille for Fenena’s life is to no avail.
Scene ii
By the banks of the Euphrates, the Israelites are resting from forced labor. Their thoughts go back to their lost homeland. Zaccaria predicts they will be released from captivity and destroy Babylon with the Lord’s help.
Part IV
The Broken Idol
Say: Babylon is captured, Baal is shamed, Merodach is dismayed; her idols are shamed, her fetishes dismayed (Jeremiah, 50:2)

Scene i
In his royal apartment, Nabucco awakens from a restless sleep to hear voices outside calling Fenena’s name. She is being led to execution. Trying the door, Nabucco realizes he is a prisoner. Desperate, he kneels to pray to the God of the Israelites for forgiveness, pledging to convert himself and his people. His reason returns and, when Abdallo and his soldiers come to see why he is trying to force the door, he convinces them that he is his old self again. Calling for a sword, he rallies his followers to regain the throne.

Scene ii
In the Palace Garden, executioners stand ready to kill Zaccaria and his followers. The old man hails Fenena as a martyr and she asks the Lord to receive her into heaven, but Nabucco arrives and orders the statue of Baal destroyed. As if by some supernatural power, it falls by itself. Abigaille takes poison and confesses her crimes, urging that Ismaele and Fenena be reunited; Dying, she prays to the God of Israel to pardon her. Nabucco tells the Israelites to return to their native land and rebuild their Temple, declaring that he himself now serves the God of the Israelites. The crowd acknowledges a miracle and praises God.

This entry was posted in OPera and tagged Giuseppe Verdi, Nabucco, The Israeli Opera. Bookmark the permalink.