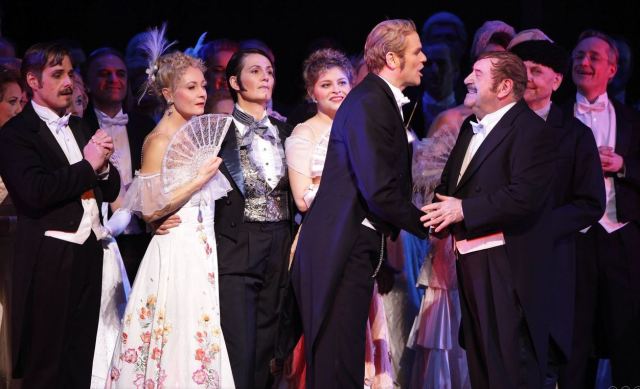 Loyalty, betrayal, love and lies. Anyone who thinks he can patch up a burnt-out marriage with a little hanky-panky on the side should make sure he doesn’t wind up with his own wife. Comes the dawn: behind bars.  This operetta is “the” absolutely valid masterwork on the topic: “fun society”.

After a presentation by Leander Haußmann, Helmut Lehberger 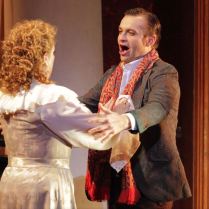 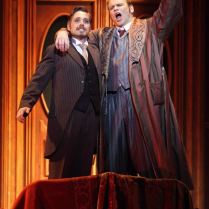 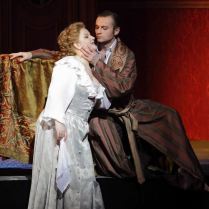 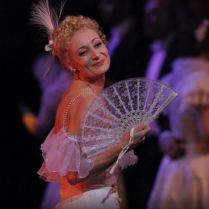 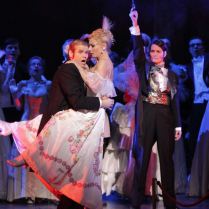 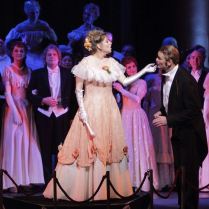 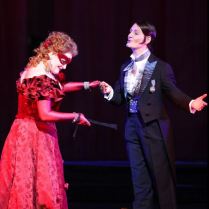 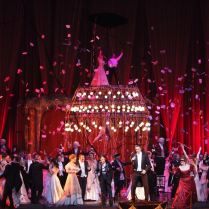 Act One. Emotions in a turmoil

A state of emotional confusion prevails in the home of Gabriel von Eisenstein:

After an absence of many years Alfredo, the supposedly long-lost, former admirer of Gabriel von Eisenstein’s wife, Rosalinde, has suddenly turned up in the sleepy little town where they live and is now doing all he can to seduce Rosalinde by charming her with his vocal prowess; for does the name not say it all, he is Alfredo, the tenor, and the object of his desire is, after all, married to a mere baritone …

Adele, a chambermaid with a fate common to all chambermaids, is beside herself with excitement: she has finally been offered a chance to excape for a few hours from the dreary, everyday existence of a servant in the form of a letter from her sister, Ida, inviting her to a ball that same evening at the home of Prince Orlofsky. But how can she possibly obtain permission to go? She has to plan very carefully and pretends for a few hours that her poor old aunt is lying on her death-bed, in urgent need of Adele’s care and attention.

In dubio pro reo? Gabriel von Eisenstein returns home in a rage from a court hearing at which he has been found guilty of insulting an official. His lawyer, Dr Blind, has summed up his case before the court in such a way that his client now faces a stiffer sentence; he has to spend eight days in prison instead of five. The only thing that calms Eisenstein’s ruffled spirits is the suggestion made by his friend, Dr Falke, as an alternative to waiting for immediate arrest. While Rosalinde believes that he is starting his prison sentence straight away, that same evening, he intends to avail himself of a temporary reprieve with a chance of drinking through the night – in female company other than his wife’s – at Prince Orlofsky’s ball and begin his sentence the following morning.

And what about his thus abandoned wife? Rosalinde at last has the time and the opportunity to succumb to the charms of her tenor. But their tête à tête is brought to an untimely close: the governor of the prison, Frank, decides to carry out his last official duty of the day in person, before also going to Prince Orlofsky’s ball. He arrests Alfredo, believing him to be Gabriel von Eisenstein. Alfredo allows himself to be mistaken for Rosalinde’s husband in order to protect the lady’s reputation and is led off to prison by Frank.

Prince Orlofsky is bored with life and is willing to spare no expense if he can only find something to amuse him once more. So Falke has set up a little farce for his delectation and invited the actors involved in the farce to the ball, without their having any idea of the part they are to play! And the name of the farce? “A bat’s revenge”, with the help of which Falke also intends, at the same time, to be revenged on Eisenstein for some wrong that he has suffered at his hands.

Adele bumps into Ida, who denies ever having written her a letter but promises to introduce her sister at the ball as a young actress by the name of Olga. Eisenstein, alias Marquis Renard, is only temporarily taken in by her talent as an actress and becomes a figure of ridicule in the eyes of the whole assembly when he maintains that he recognizes Olga as his chambermaid.

Without realizing who it is, Eisenstein swears eternal friendship with Frank, the prison governor, alias Chevalier Chagrin. Having been told by Falke that her husband is enjoying himself at the ball while she thought he was languishing in prison, Rosalinde appears disguised as a Hungarian countess. Eisenstein is quite fascinated by this apparent stranger and tries to seduce his own wife with the help of his favourite special trick with his watch. Instead of succumbing to his all too familiar charms, Rosalinde takes the watch into her possession as evidence.

The more champagne is drunk, the less inhibited the guests at the ball become until finally everyone is swearing eternal friendship. However, any further dissipation is nipped abruptly in the bud by the striking of the clock – it is six o’clock in the morning and high time for two of the gentlemen, Eisenstein and Frank: the one to begin his prison sentence and the other his day’s work.

Act Three. The champagne is to blame

Italian arias are gradually driving Frosch, the prison warden, mad, and his way of coping with the problem of all this Puccini is to find solace in drink. The continuous aggravation to his nerves caused by the wonderful voice of his prisoner, Alfredo, is enough to drive Frosch to extremes–but you can’t really shoot a famous opera singer …

The prison governor, Frank, has only just returned to his place of work after the night’s revelry when Ida and Adele seek an audience with him. Adele demonstrates her talent as an actress for him and he promises to pay for her to receive coaching.

When Eisenstein arrives at the prison to start his sentence, he discovers that someone unknown to him has already done so in his place. A dreadful thought suddenly crosses his mind: could it be that his wife has been repaying him in kind while he is under arrest?

In order to have proof of his suspicions, he orders Dr Blind who comes to the prison to take off his clothes and dons them himself. Meanwhile Rosalinde also arrives at the prison and tries, with the help of the lawyer, Dr Blind, – alias Eisenstein himself – to free the wrongly-arrested Alfredo from his delicate situation. But the tables are turned! Before her aggrieved husband can give full rein to his blind jealousy, Falke exposes his real identity to all Prince Orlofsky’s guests, who have also appeared at the prison in the meantime.

All’s well that ends well! Falke has had his revenge and amused Orlofsky. Rosalinde forgives her Gabriel and Adele can look forward to a bright future as an actress.