Otello at the MET 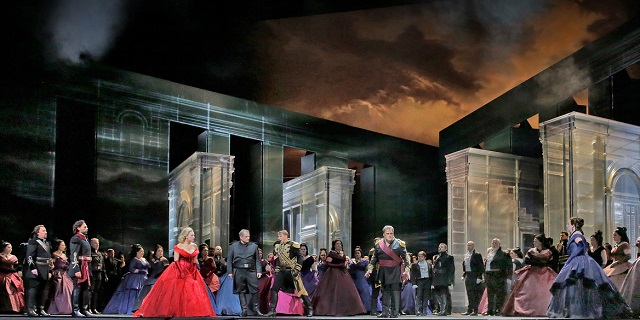 Željko Lučić “is superb as Iago, a chilling and malevolent portrait of evil personified… A stark and simple yet often powerful new production of Verdi’s passionate and masterful rendering of one of Shakespeare’s greatest plays.” —Huffington Post

Production a gift of Jacqueline Desmarais, in memory of Paul G. Desmarais Sr.

Often cited as Italian opera’s greatest tragedy, Otello is a miraculous union of music and drama, a masterpiece as profound philosophically as it is thrilling theatrically. Shakespeare’s tale of an outsider, a great hero who can’t control his jealousy, was carefully molded by the librettist Arrigo Boito into a taut and powerful opera text. Otello almost wasn’t written: following the success of Aida and his setting of the Requiem mass in the early 1870s, Verdi considered himself retired, and it took Boito and publisher Giulio Ricordi several years to persuade him to take on a major new work. 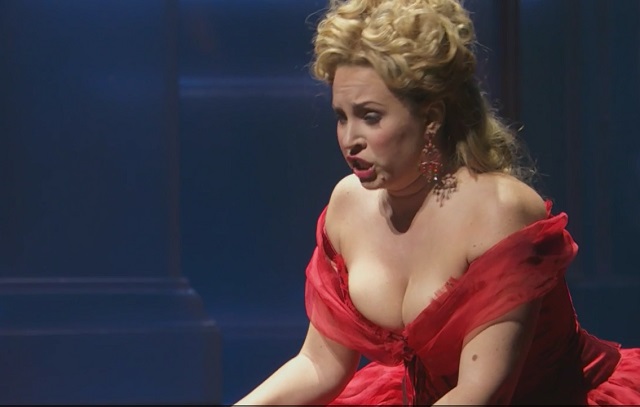 The opera is set on the island of Cyprus in the late 15th century. The island itself represents an outpost of a European power (Venice) under constant attack from an encroaching, hostile adversary (the Turkish Empire). In a sense, the setting echoes Otello’s outsider status: he is a foreigner (a “Moor,” an uncertain term applied indiscriminately at that time to North African Arabs, black Africans, and others) surrounded by suspicious Europeans. The Met’s new production updates the setting to the late 19th century, where the action unfolds in a shape-shifting glass palace.

The score of Otello is remarkable for its overall intensity and dramatic insight rather than the memorable solo numbers that made Verdi’s earlier works so popular. The latter are present most notably in Desdemona’s Willow Song and haunting “Ave Maria” in the last act and the baritone’s “Credo” at the start of Act II. Throughout the score, the orchestra plays a diverse role unprecedented in Italian opera, beginning with the impressive opening storm scene, in which the power of nature is depicted with full forces, including an organ, playing at the maximum possible volume. 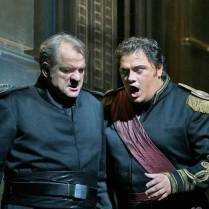 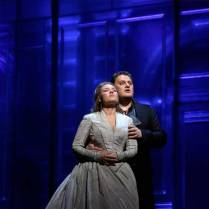 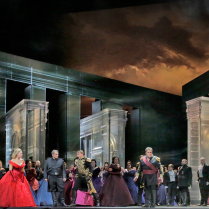 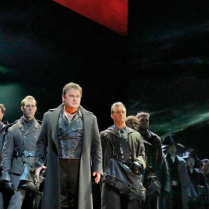 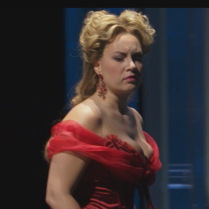 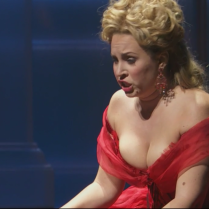 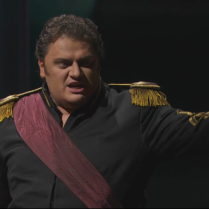 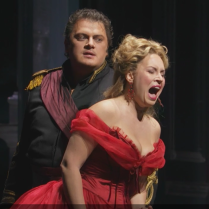 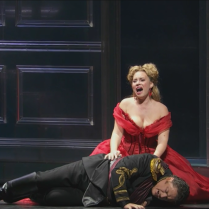 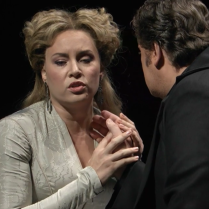 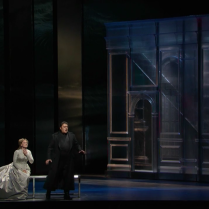 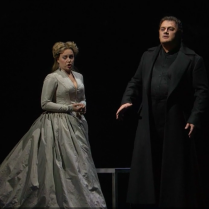 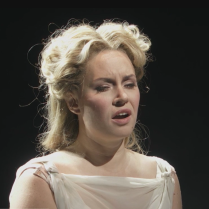 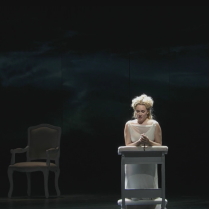 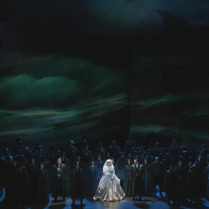 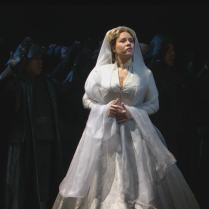 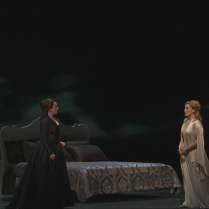 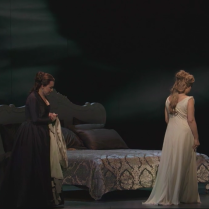 During a violent storm, the people of Cyprus await the return of their governor and general of the Venetian fleet, the Moor Otello. He has been fighting the Muslim Turks and guides his victorious navy to safe harbor. In his absence, the young Venetian Roderigo has arrived in Cyprus and fallen in love with Otello’s new wife, Desdemona. Otello’s ensign Iago, who secretly hates the governor for promoting the officer Cassio over him, promises Roderigo to help win her. While the citizens celebrate their governor’s return, Iago launches his plan to ruin Otello. Knowing that Cassio gets drunk easily, Iago proposes a toast. Cassio declines to drink, but abandons his scruples when Iago salutes Desdemona, who is a favorite of the people. Iago then goads Roderigo into provoking a fight with Cassio, who is now fully drunk. Montano, the former governor, tries to separate the two, and Cassio attacks him as well. Otello appears to restore order, furious about his soldiers’ behavior. When he realizes that Desdemona has also been disturbed by the commotion, he takes away Cassio’s recent promotion and dismisses everyone. Otello and Desdemona reaffirm their love.

Iago advises Cassio to present his case to Desdemona, arguing that her influence on Otello will secure his rehabilitation. Alone, Iago reveals his bleak, nihilistic view of humankind. He makes dismissive remarks about Desdemona’s fidelity to Otello, whose jealousy is easily aroused. Otello’s suspicions are raised when Desdemona appears and appeals to him on Cassio’s behalf. Otello evasively complains of a headache, and Desdemona offers him a handkerchief, which he tosses to the ground. Emilia, Iago’s wife and Desdemona’s maidservant, retrieves it, and Iago seizes the handkerchief from her. Left alone with Otello, Iago fans the flames of the governor’s suspicions by inventing a story of how Cassio had spoken of Desdemona in his sleep, and how he saw her handkerchief in Cassio’s hand. Seething with jealousy, Otello is now convinced that his wife is unfaithful. The two men join in an oath to punish Cassio and Desdemona.

Iago’s plot continues to unfold as he tells Otello that he will have further proof of his wife and Cassio’s betrayal. When, moments later, Desdemona approaches Otello and once again pleads for Cassio, Otello again feigns a headache and insists on seeing the missing handkerchief, which he had once given her as a gift. When she cannot produce it, he insults her as a whore. Alone, he gives in to his desperation and self-pity. Iago returns with Cassio, and Otello hides to eavesdrop on their conversation, which Iago cleverly leads in such a way that Otello is convinced they are discussing Cassio’s affair with Desdemona. Cassio mentions an unknown admirer’s gift and produces the telltale handkerchief—in fact planted by Iago in his room. Otello is shattered and vows that he will kill his wife. Iago promises to have Roderigo deal with Cassio.A delegation from Venice arrives to recall Otello home and to appoint Cassio as the new governor of Cyprus. At this news, Otello loses control and explodes in a rage, hurling insults at Desdemona in front of the assembled crowd. He orders everyone away and finally collapses in a seizure. As the Cypriots are heard from outside praising Otello as the “Lion of Venice,” Iago gloats over him, “Behold the Lion!”

Emilia helps the distraught Desdemona prepare for bed. She has just finished saying her evening prayers when Otello enters and wakes her with a kiss to tell her he is about to kill her. Paralyzed with fear, Desdemona again protests her innocence. Otello coldly strangles her. Emilia runs in with news that Cassio has killed Roderigo. Iago’s plot is finally revealed and Otello realizes what he has done. Reflecting on his past glory he pulls out a dagger and stabs himself, dying with a final kiss for his wife.