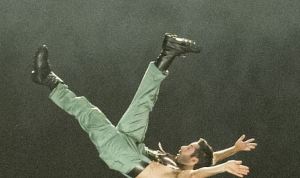 The ultimate femme fatale returns in a provocative staging by acclaimed director Calixto Bieito. His raw take on Carmen heightens the intense emotions pulsing through this tale of love, lust and murder. The result is a powerful account of a free-spirited woman and her obsessive lover. Be swept into Carmen’s deadly seduction as never before.

Sung in French with English supertitles

See A Performance, Invite a Friend 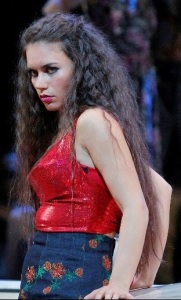 *OperaVision, HD video projection screens featured in the Balcony level for this performance, is made possible by the Koret/Taube Media Suite. 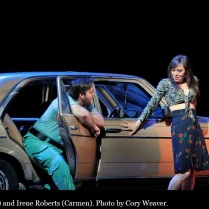 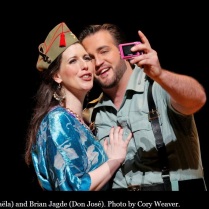 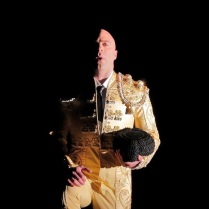 Co-production with Boston Lyric Opera based on Bieito’s production which originated at El Festival de Peralada in Catalonia and Opera Zuid in the Netherlands.

ACT I
20th-century, Spain.
Corporal Moralès and his men are resting outside the guardhouse as Micaëla comes looking for Don José. The change of guard arrives, among them Corporal José and Lieutenant Zuniga. Zuniga questions José about the nearby cigarette factory and the girls who work there. The cigarette girls leave the factory for a break, and the men await a glimpse of Carmen. When she appears, Carmen flirts with them and gives a flower to José. Micaëla returns and gives José a letter from his mother. She leaves when he begins to read the letter that advises him to marry Micaëla and settle down. Screams are heard from the cigarette factory, and Zuniga sends José to find out the cause of the disturbance. José returns with Carmen and another girl, Manuelita, whose face has a knife wound allegedly inflicted by Carmen. When Carmen refuses to speak, Zuniga orders José to tie her hands and take her to prison and leaves to make out the warrant for Carmen’s arrest. Carmen hints to José about a rendezvous at her friend Lillas Pastia’s tavern, and José agrees to let her escape. When Zuniga returns with the warrant, Carmen breaks free as she is being led off to prison. José is demoted and arrested for his participation in Carmen’s escape.

ACT II
Carmen and her Gypsy friends Frasquita and Mercédès sing and dance at Lillas Pastia’s tavern. Zuniga tells Carmen that José has been released from prison. A procession announces the arrival of the toreador, Escamillo. Attracted to Carmen, he invites her to attend his upcoming bullfight but she declines. As the soldiers leave, Zuniga promises to return to see Carmen. Dancaïre and Remendado come to ask the three Gypsy girls to join them in a smuggling expedition. José arrives and gives Carmen the gold piece she sent him along with a file while he was in prison. He explains that his soldier’s honor prevented him from trying to escape. Carmen dances for José, but when retreat sounds, he starts to leave for the barracks. She taunts him and challenges him to follow her to the mountains. Zuniga returns and José attacks him in a jealous rage, but the smugglers break up the fight and disarm José. José has no choice but to join the band of smugglers.

ACT III
The smugglers are at work in the mountains. After a brief period of happiness, Carmen has become fed up with José’s jealousy. Frasquita and Mercédès read their own good fortune in the cards. When Carmen takes her turn, she only finds death. Dancaïre asks the girls to distract the customs men on duty, leaving José on guard. Looking for José, Micaëla is led to the smuggler’s cove by a mountain guide who warns her of the perils she faces. She hides as Escamillo arrives unexpectedly. A jealous José challenges him to a knife fight, but Carmen and the smugglers separate them. Escamillo invites the band of smugglers to his next bullfight. Micaëla is discovered hiding, and she tells José that his mother is dying. He leaves with her, but warns Carmen that they will meet again.

ACT IV
The crowd gathers outside the arena for the bullfight. When Carmen and Escamillo appear, Frasquita and Mercédès warn her that José is in the crowd. Carmen declares she is not afraid of José and waits alone outside the arena. José confronts her and begs that she return to him. She coldly tells him all is over between them and returns the ring he had given her. José stabs Carmen and confesses to the murder.

Erika Grimaldi is one of the most sought after young sopranos in Europe today, having delivered critically acclaimed performances in nearly a dozen roles at the prestigious Teatro Regio di Torino. She is equally at home at such major opera houses as Teatro dell’Opera di Roma, Bayerische Staatsoper in Munich, Teatro di San Carlo in Naples, and Opéra National de Montpellier.

Ms. Grimaldi’s engagements for the 2015/16 season include the title role in Giovanna d’Arco at Teatro alla Scala in Milan, Armilla in La donna serpente at Teatro Regio, Alice Ford in Falstaff at the Verbier Festival in Switzerland, Mimi in La Boheme at Opera de Oviedo and the Savonlinna Festival in Finland, Amelia in Simon Boccanegra in Hong Kong, and Micaëla in Carmen for her debut at San Francisco Opera. Future engagements include Mimi in La Boheme and her debut as Nedda in Pagliacci at Teatro Regio, Mathilde in Guillaume Tell at Bayerische Staatsoper in Munich, Mimi at San Francisco Opera, and Verdi’s Requiem with the London Symphony Orchestra.

In the 2014/15 season, Grimaldi sang Desdemona in Otello and the Countess in Le nozze di Figaro at Teatro Regio, Donna Anna in Don Giovanni at Opera de Bellas Artes in Mexico City, Donna Fiorilla in Il turco in Italia for her debut at Staatsoper Hamburg, and Mimi in La Boheme at Teatro di San Carlo. Her engagements from the 2013/14 season included Liu in Turandot, her first run of Mathilde in Guillaume Tell, and her first performances as Maria in Simon Boccanegra at Teatro Regio. She made her U.S. debut in the summer of 2014 as a soloist in Beethoven’s Symphony No.9 at the Mostly Mozart Festival in New York. In the 2012/13 season, Grimaldi sang three leading roles in Turin: Mimi in La Boheme, Micaëla in Carmen, and Elisetta in Cimarosa’s Il Matrimonio Segreto. 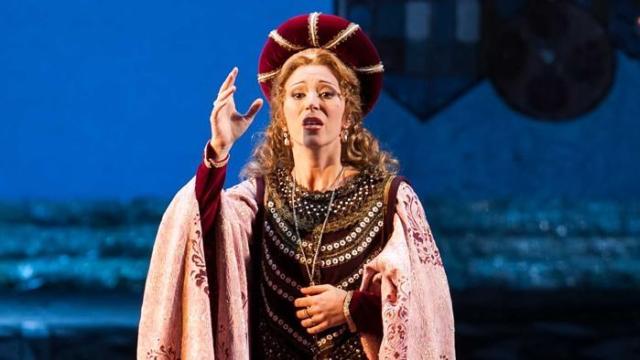 Ms. Grimaldi gave her first performance at Teatro dell’Opera di Roma in 2010, playing the role of Anaï in Rossini’s Moïse et Pharaon under the baton of Riccardo Muti. Later that season, she sang her first Micaëla in Carmen at Teatro Lirico di Cagliari. In 2009, Grimaldi made acclaimed debuts as Adina in Donizetti’s L’elisir d’amore at the Teatro Filarmonico in Verona, Pamina in Mozart’s Die Zauberflöte at the Teatro Massimo in Palermo, and Donna Anna in Don Giovanni at the Avenches Festival in Switzerland, staged by Giancarlo Del Monaco. Recently, she joined Jonas Kaufmann in a scene from Il Trovatore on the tenor’s recent all-Verdi album for SONY CLASSICAL.

Born in Asti, Italy, Erika Grimaldi graduated with distinction from the Conservatorio Giuseppe Verdi in Turin, eventually distinguishing herself at various vocal competitions. Her first of many successes came at the Crescentino International Competition in Vercelli and the International Giacomo Lauri-Volpi Competition in Spain. After winning First Prize at the Comunità Europea competition in 2008, Grimaldi was immediately offered the role of Mimi in La Boheme at the Teatro Regio in Turin.

This entry was posted in OPera and tagged Carmen, Erika Grimaldi. Bookmark the permalink.