“Eugene Onegin” at the Metropolitan Opera

Scenarios of unrequited love are the stock-in-trade of opera composers, but with Eugene Onegin Tchaikovsky achieved something far beyond another varia- tion on an all-too-familiar theme. For Deborah Warner, whose new production opens the Met season on September 23, the opera offers “a complete portrait of the human condition, viewed through the frame of the young approaching life and love for the first time.”

Capturing that may sound like a tall order, but a sensitive presentation of Tchaikovsky’s richly lyrical masterpiece can rank among the most moving experiences an audience can have in the opera house. The Met’s new Onegin features the added benefit of a dream cast conducted by the remarkable Russian maestro Valery Gergiev. Anna Netrebko under- takes the role of the shy ingénue Tatiana, whose heart is broken after she confesses her love to the charming but uninterested Onegin. Polish baritone Mariusz Kwiecien, another Met favorite, takes on the title role, and tenor Piotr Beczala is the poet Lenski, Onegin’s ill-fated friend who hot-headedly challenges him to a duel over a meaningless flirtation. (Later in the season, a second cast will include Marina Poplavskaya, Peter Mattei, and Rolando Villazón in an eagerly anticipated return to the Met stage.)

Onegin was once considered “exotic” by virtue of its Russianness—completed in 1881, it took until 1920 to have its American premiere, when the Met introduced the work in an Italian translation— but today it is recognized as a core repertory work, a counterpart to the ceremonial grandeur and mystery of Mussorgsky’s epic Boris Godunov. Both operas now form the twin pillars of the Russian repertoire regularly produced around the world.

Tchaikovsky’s ability to give dimension to his characters through music, says Warner, is extraordinary. “It’s as big and luxurious a subject as talking about character in Shakespeare.” She sees the core of the opera as an exploration of “lost opportunity” resulting from “the fabulous mistakes these young people make.” Warner expresses an intense sympathy for what the characters endure that mirrors Tchaikovsky’s own compassion for the plight of these figures.

The match of composer and subject matter in Eugene Onegin has come to seem inevitable. Curiously, though, Tchaikovsky initially balked when a singer friend casually suggested making an opera out of the epic novel-in-verse Alexander Pushkin had published between 1825 and 1832. There were at least two good reasons for his hesitation. Pushkin’s Eugene Onegin had acquired a sacrosanct status that might be compared to that of Goethe’s Faustin Western Europe. To meddle with such an icon was to invite criticism from the start.

In fact there’s always been a contingent ready to accuse Tchaikovsky of being unfaithful to the spirit of Pushkin’s creation. On a purely practical level, Tchaikovsky worried that Eugene Onegin was inherently undramatic, at least in the sense of a clear linear plot. The essence of Pushkin’s epic, after all, is to be found in its narrative style and tone, not in the loosely strung-together sequence of incidents it recounts. Fortunately for opera lovers, Tchaikovsky overcame his doubts. The chief reason usually cited (and one suggested by the composer himself) is that a real-life episode prompted his change of heart. In the spring of 1877, Antonina Milyukova, one of his former students, sent an epistolary confession of love—an uncanny echo of the central incident of the opera’s first act, the effects of which ripple through the tragic series of misunderstandings between Tatiana and Onegin.

It’s hard to tell whether art imitated life or vice versa. The sudden appearance of Antonina’s pleading letters may have sensitized Tchaikovsky to the hidden potential of Pushkin’s work. Or his recent thinking about Onegin may have caused him to resolve not to repeat the hero’s cold rejection of a vulnerable young woman.

Whichever was the case, Tchaikovsky made a hasty decision to marry Antonina in July. Contemporary scholarship has called into question the standard moralizing depictions of a composer “tormented” by his preference for his own sex. His failed attempt at a heterosexual marriage—it didn’t last even three months, and Tchaikovsky deserted his new bride by early fall—may actually have attuned him all the more to the value of emotional honesty in a way that directly inspired his work on Eugene Onegin. Despite the personal crisis of his ill-advised marriage, Tchaikovsky in fact benefited from a creative surge around this time, completing the score by early 1878.

The matter of emotional honesty—and its consequences—is, for Warner, the key to the sensibility of the operatic Onegin: “What matters most to me here is the pursuit of truth.Onegin is on a par with Chekhov. It is absolutely the same territory. You want to believe these people are living and breathing and feeling utterly honestly, truthfully.”

Such an interpretation accords well with Tchaikovsky’s own perception of the path he was embarking on with Eugene Onegin. What he originally feared as a liability—the perceived lack of a traditional external plot—allowed him to focus on an innovative approach for which his musical sensibility was extremely well suited. “Let my opera be undramatic, let it have little action,” Tchaikovsky wrote to his brother Modest, who had a hand in the libretto crafted from Pushkin’s text by Konstantin Shilovsky and the composer himself, “but I am in love with the image of Tatiana. I am enraptured with Pushkin’s verse, and I am writing music for them because I feel drawn to them.”

The limitations of operatic convention had frustrated Tchaikovsky’s previous efforts for the stage, and he even decided to destroy the scores of his first two operas. A year before plunging into Onegin, in 1876, the composer had made the pilgrimage to Bayreuth for the world premiere of the entire Ring cycle and found himself distinctly under- whelmed by the Wagnerian cosmos of gods and heroes. The “unheroic” events of Pushkin’s story, by contrast, opened the door to a lyrical, emotional realism of enormous theatrical potential. Within a framework that includes references to the spectacle of grand opera—in the famous dance music pulsating through the party scenes that serve as structural pillars—Tchaikovsky sculpts an intensely intimate drama of the inner lives of his characters. Artifice and convention are ironically contrasted with the spontaneity of untrammeled feeling. Tellingly, the score’s most admired passages are essentially character monologues. Even the powerful final confrontation between Tatiana and Onegin unfolds as a sequence of solos: this is a tragic love story with no love duets.

Warner’s reference to Anton Chekhov is particularly apt. The playwright, whom Tchaikovsky befriended in his later years, expressed admiration for the manner in which Onegin had been adapted to the stage. (The two artists even came close to collaborating on one of the great “what-if” operas.) Onegin’s dramaturgical structure as a chain of emotionally revealing vignettes is stylisticaly similar to many of Chekhov’s plays, and instead of labeling Eugene Onegin an opera, Tchaikovsky called it “lyric scenes.”

Thus Warner’s new production forwards the setting by a few notches, from the time of Pushkin to the later 19th century, as to be contemporaneous with Chekhov and Tchaikovsky. In part, she explains, this was because the earlier time frame happens to fall smack in the middle of what’s become associated with “the cliché of operatic costume.” Her goal, with the help of costume designer Chloe Obolensky’s ravishingly detailed work, is to create an impression of “wonderful clothes, not costumes” so that “you feel you’re walking directly into the period.” Tom Pye’s set designs and Jean Kalman’s lighting, meanwhile, establish a “glassy, icy” look for the piece as whole. One major change since the production’s first outing in London is the visual concept for the three scenes of the first act. Now they are seen to transpire in a large area suggesting an underused conservatory “with lots of glass and sun-bleached blinds… a sleepy atmosphere. It’s Tatiana’s favorite place in the house.”

Warner is particularly excited about  the casting of Netrebko. “At the height of her powers as an opera singer, Anna is a major actress,” she declares. The production signals a turning point in Netrebko’s career as well. Surprisingly, the Russian soprano, who is starring in the Met’s season-opening production for the third year in a row, waited until this spring to make her role debut as Tatiana—in a production at the Vienna Staatsoper, which prompted the New York Times to rave about her “outpouring of gorgeous sound and heartfelt emotion that few could match today, none so idiomatically.” Netrebko believes she recently reached the right point in her career to take on this signature role of the Russian repertoire, “because my voice has changed. I’m a different person. I look different, and I’m different in my mind. It’s time to say goodbye to the –inas,” she says, referring to the ingénues of the bel canto repertoire.

It’s often been remarked that the opera’s true central figure is Tatiana, and Netrebko explains that there’s more than meets the eye in the emotional journey Tchaikovsky has her travel. The relation- ship between Onegin and Tatiana, she says, should be depicted “not as a sentimental story but something much deeper. If you try to portray it simply as a love story, it’s silly. That has nothing to do with Pushkin or Tchaikovsky. Russian characters are complicated by nature. As a girl, she’s rustic and lives in her own world. No one understands her. Even her mother tells her as she reads, ‘In real life there are no heroes.’ Tatiana sees Onegin as a soul mate because neither of them wants to belong to the ‘real world.’”

By the final act, though, Tatiana has followed the pattern of her mother and accepted adulthood in an arranged marriage to the kind, predictable Prince Gremin. When she encounters Onegin again, years after being crushed by his rejection, Netrebko says, “it’s not that she takes revenge on him for initially rejecting her, but that she is bound to a specific society. She wanted to break out of this world as a girl, but as an adult she becomes a part of it; it cannot be changed. And I think it kills her.”

Netrebko describes the challenge of Tchaikovsky’s deceptive simplicity in this score. When she was first learning the Letter Scene a decade ago with Gergiev, “he told me: ‘There are four phrases with the same melody, but you have to sing them in different ways!’ It ultimately sounds very simple, but that’s the hardest part of all. But I love the Letter Scene because, as challenging as it is, it’s so full of color and internal feelings, impressions, experience.” And she looks forward to teaming up once again with the extraordinary Mariusz Kwiecien, who sang the plucky Belcore last season to her Adina in L’Elisir d’Amore and who has made Onegin a calling-card role, scoring major successes in Paris, London, and Madrid. “Mariusz is a stage animal,” Netrebko says. “He has a beautiful dark voice and a free range. I think he’s old-fashioned in a good way. I love performing with him.”

Since Warner’s previous work—particularly her stagings of Shakespeare and Samuel Beckett—has ignited a bit of controversy, the director admits that some might be puzzled by an approach to Onegin that seems, on the surface at least, more or less traditional. Yet she hopes the production can transcend the usual categories existing somewhere on a spectrum “from traditional to cutting edge or provocative. I think that with Pushkin’s text, with Tchaikovsky’s music, we’re in pursuit of truth.” And what ultimately matters, for Warner, “is that we affect the hearts of the audience.” —Thomas May

This article was first published in the Met’s Season Book and Playbill in September 2013. 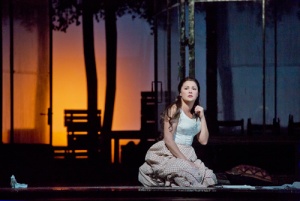 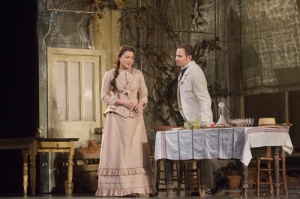 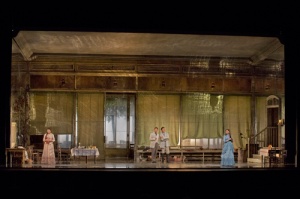 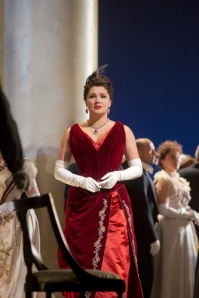 1 Response to “Eugene Onegin” at the Metropolitan Opera