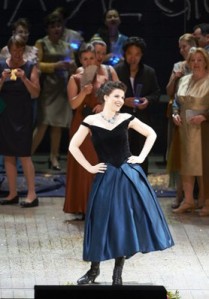 Scene 1
Violetta Valéry, a radiant and well-to-do Parisian courtesan, who seems to have fully recovered from a serious illness, is giving a festive party attended by many prominent personages in high society. Gastone, one of her host of admirers, introduces Alfredo
Germont, who has long worshipped her from afar. Alfredo sings a toast in praise of love, to which Violetta responds by extolling a life given over solely to pleasure. But as she bids her guests join in the dancing she is racked by a sudden spasm of coughing and giddiness. Alfredo avows his love, and though Violetta cannot at first bring herself to believe that he is in earnest she is deeply touched by his declaration. However, she makes it clear to him that she can only offer friendship, not love; and handing him a camellia she tells him that when it begins to droop he may come to her again. Left alone, she is assailed by misgivings about her past life: perhaps she is beginning to fall in love with Alfredo after all? 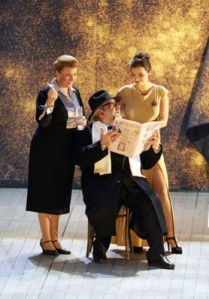 Scene 2
Violetta and Alfredo have been living for the last three months in a country villa and are ecstatically happy. But through Violetta’s maid Annina, who has just returned from Paris, Alfredo learns that Violetta has been spending her savings on paying for their life at the villa. Alfredo thereupon decides to go to Paris to raise some money out of his own resources. Just as Violetta has opened a letter from her friend Flora inviting her to a ball a caller is announced: it is Alfredo’s father Giorgio, who accuses Violetta of living on his son. Violetta explains that on the contrary it is she who has spent all her savings that on Alfredo, and that it is for love of him that she has abandoned her former life. Giorgio Germont, who is a highly respected figure in society, then appeals to Violetta: his daughter’s happiness is at stake as her fiancé is threatening to break off the engagement because of her brother Alfredo’s scandalous association with a courtesan. Giorgio begs Violetta to salve the honour of his family by giving Alfredo up, but not to tell Alfredo of his father’s visit. Deeply distressed, Violetta consents and leaves a note for Alfredo
saying that she has been unfaithful to him and is leaving. On his return from Paris Alfredo is stunned by Violetta’s abrupt departure, but refuses to obey his father’s command to return to the family home. Suddenly his eye falls on Flora’s invitation,
which confirms his suspicions: he resolves to go to the party himself and settle with Violetta.

The guests at Flora’s party in costume and masked. Alfredo arrives and joins a group of cardplayers. Presently Violetta enters arm-in-arm with Baron Douphol, an old admirer of hers. Alfredo, who has enjoyed a run of luck with the cards, challenges his supposed rival to a game, but Violetta intervenes, fearing that it will come to a duel between the two men. True to her promise to Giorgio Germont not to reveal her real reason for leaving his son, Violetta tells Alfredo that she was really in love with Douphol all the time. Blind with rage, and in full view of Flora’s guests, Alfredo flings his winnings at Violetta’s feet as payment for her ”services“. Suddenly Giorgio Germont appears: full of remorse for having unfairly forced Violetta to conceal her love for his son, he expresses his disgust at his son’s behaviour. 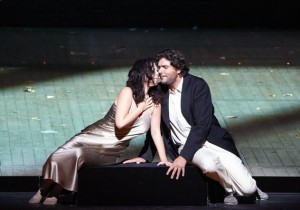 Scene 4
Violetta is desperately ill, physically and mentally, and the doctor tells Annina that it can only be a matter of hours. Violetta rallies when a letter arrives from Alfredo’s father with the news that Alfredo has been told the truth about her having spent her savings on his behalf, and that following a duel in which the Baron was slightly wounded. Alfredo had to flee the country, but is now on his way back to implore her forgiveness. Alfredo arrives and embraces her passionately: in her ecstasy Violetta looks forward to a complete recovery. But only for a moment: she now realizes that she is at death’s door, and by the time Alfredo’s father arrives to embrace his son’s betrothed, it is too late. 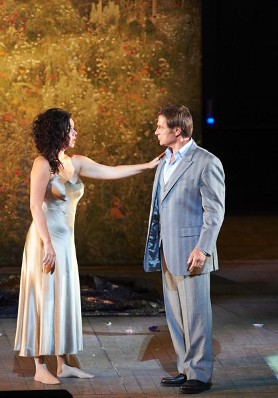 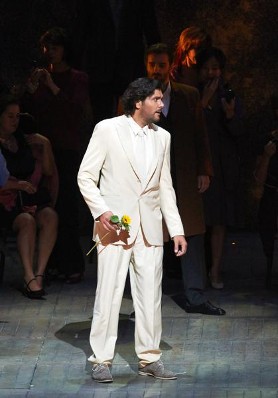 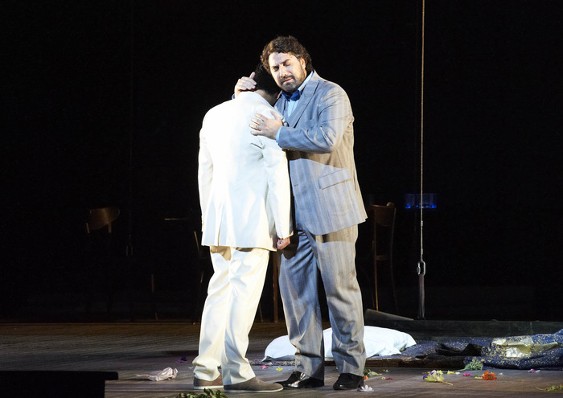 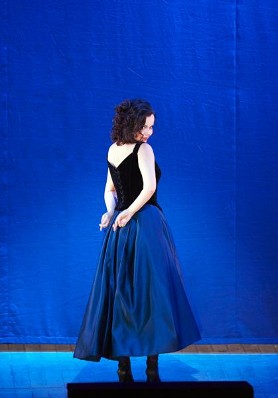 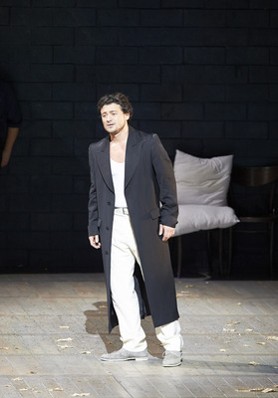