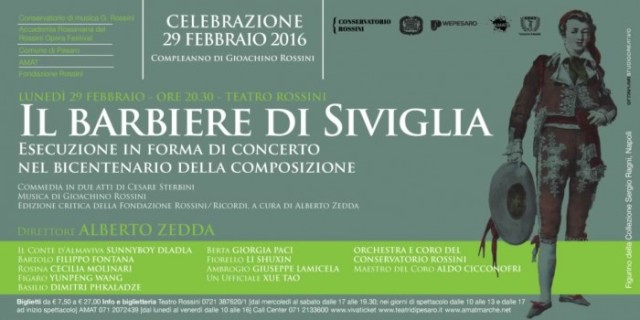 The barber of Seville, Rossini’s most famous opera, was composed two hundred years ago, and on Monday 29th February, Gioachino Rossini’s birthday, Pesaro will be dedicating a concert performance of the opera to the memory of her most illustrious citizen. The performance, organized by the Conservatorio Rossini, will begin at 8.30 p.m. at the Teatro Rossini. (On that same day the Conservatory will be commencing its 134th academic year.)  The Rossini Opera Festival’s Accademia Rossiniana, the Town Council of Pesaro, AMAT and the Rossini Foundation are also involved in the organization of the event.  Alberto Zedda will conduct the Chorus and Orchestra of the Conservatorio Rossini.

Maestro Zedda, having dedicated much of his life to the study of Rossini’s music, was the first person to complain about the discrepancies between the scores generally used for performances of the Barber and Rossini’s autograph score.  The critical edition of the opera that he prepared, using  original methods that were later adopted by the Rossini Foundation for the publication of Rossini’s complete works, was so widely praised and adopted that it has become a foundation stone of the Rossini Renaissance that has transformed our ideas about Rossini and has led to the revival in the theatre of all his operatic works, largely forgotten, above all where the “serious” operas are concerned.  That Critical Edition, absolutely the first ever realized of any major Italian opera, has strongly influenced our way of preparing and performing operas in the bel canto repertoire.

Following in the spirit of Zedda’s work of teaching young singers,  the cast of the promised Barber will be drawn from some of the most brilliantly promising young singers heard in recent editions of the Accademia Rossiniana, an institution that he has directed from its foundation (1989) as part of the Rossini Opera Festival: Sunnyboy Dladla (Count Almaviva), Filippo Fontana (Bartolo), Cecilia Molinari (Rosina), Yunpeng Wang (Figaro), Dimitri Pkhaladze (Basilio).  They will be joined by some of the best pupils of the Conservatorio Rossini’s singing classes: Giorgia Paci (Berta), Li Shuxin (Fiorello), Giuseppe Lamicela (Ambrogio)  and Xue Tao (an Officer).

Founded in 1869 by the terms of Gioachino Rossini’s last will and testament, Pesaro’s Conservatory, named after him, began academic courses in 1882 and is one of the oldest and most respected.  Right from the beginning the school’s high artistic level has been guaranteed by the presence, in the direcotr’s chair, of some of the leading Italian composers of their day.  The first director was Carlo Pedrotti, an opera composer from Verona, who, in order to take on the new job, resigned his post as conductor of the Orchestra of the Teatro Regio, Turin, and persuaded some first-class teachers to follow him to Pesaro.  Later, other famous directors included Pietro Mascagni, Amilcare Zanella, Riccardo Zandonai, Lino Liviabella, Marcello Abbado.  Many of the school’s pupils have also, in recent years, distinguished themselves in the international world of music and have followed brilliant careers  bearing witness to the seriously high quality of the courses they studied.  Among the most historically significant pupils of the Conservatorio Rossini we may mention the soprano Renata Tebaldi, the tenor Mario Del Monaco and the composer Riz Ortolani.

The ROF, in collaboration with Italian Cultural Institutes and the Casa Italiana Zerilli Marimò NYU, is organizing a series of events in honour of Rossini’s birthday. 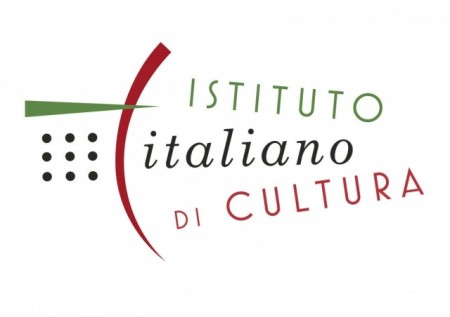 This entry was posted in Exhibits, Lectures, Music, OPera. Bookmark the permalink.